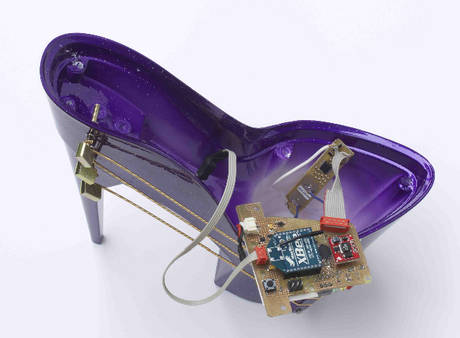 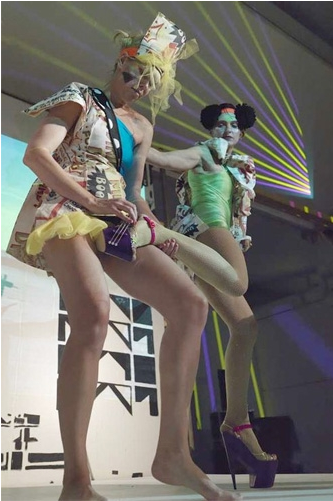 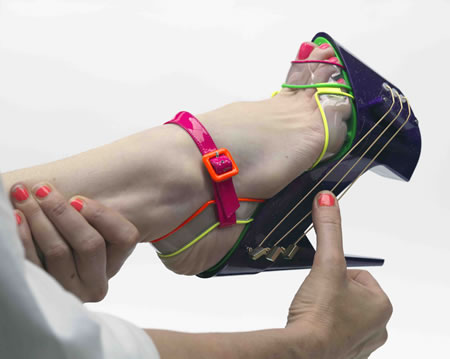 Stage wear has strongly influenced the evolution of implemented technologies into our clothes. The interesting part is that most of the time the functional aspect of it is not highly studied, but the visual rendings with lights, movements are rather offering to the audience clothes that are performing as much as the artist on stage. From Lady Gaga to other artists, this trend has been emerging from the last 3 years a complete part of a performance, the costumes are as important as the person on stage. The Eshoe by the band Chicks On Speed, or the guitar shoe. The surprise is that its actually not only visually pleasing but rather an object that takes full part of their performance, the instrumental shoe! A shoe that makes sounds! No really! Its Brilliant! The E-SHOE is a high Heeled Shoe Guitar by Chicks on Speed and Max and Hangar.org this year. Part of the collection of Objekt Instruments by COS. from the amazing blog of- www.futureofashion.blogspot.com

Geek Chic for Your Bluetooth!

The link between technology and jewelry takes another step forward with the launch of a new line designed to make Bluetooth beautiful. The Victoria line from Novero is a collection of exquisite communication pieces that can be worn around the neck when not in use. Designs include the Victoria Lapis set with sterling silver, the Victoria Pearl with pearls and gold and the Victoria Stripes molded from contemporary black silicone with stripes in brushed gold. The Victoria collection will be available later this summer at select retailers in North America, Europe and Asia. Custom orders are also available. The “la première édition” is a series of five commissioned pieces fashioned from precious metals and rare jewels valued at more than $120,000 each. Novero was founded in 2008 via a management buyout from Nokia orchestrated by Razvan Olosu. The company is headquartered in Düsseldorf, Germany, with over 425 employees across offices in Europe, North America and Asia. 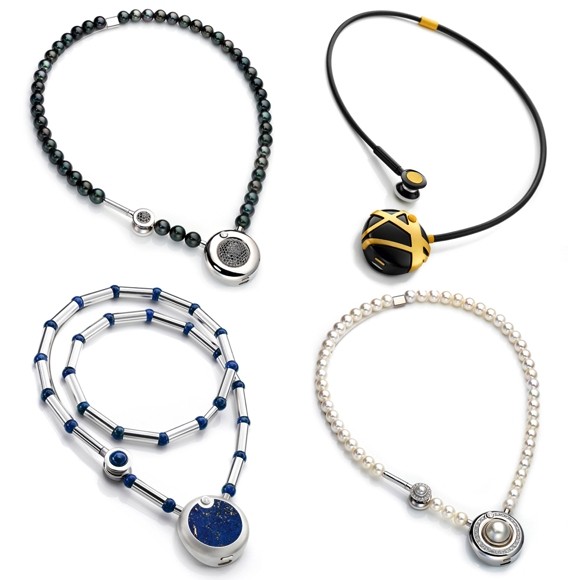 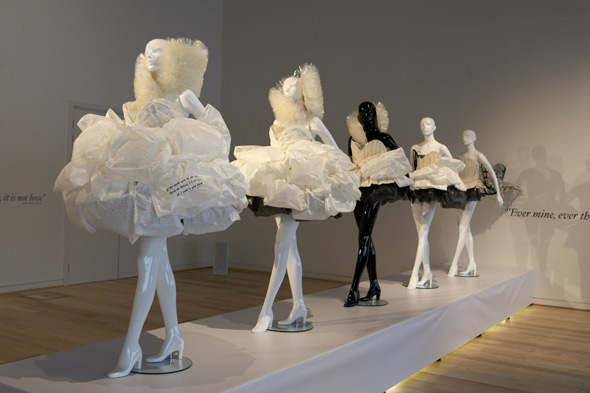 British researchers have developed an environmentally friendly garment that can simply be dissolved in water after being worn. Fashion and engineering students at Sheffield Hallam University developed the wedding dress, which can be transformed into five new fashion pieces. The dress has polyvinyl alcohol, a biodegradable substance that is used in laundry bags and washing detergents, knitted into the fabric. This enables to be dissolved into water without harming the environment. Their creation is to be featured in an forthcoming exhibition, titled, a sustainable marriage, which will be shown at the university later this month. But the payoff for the bride wearing this dress would be that they would need to wear an umbrella to their nuptials if rain was likely to spoil their big day. The design might not be to everyone’s fancy either. “The students wanted to challenge the notion that a wedding dress should only be used once and aimed to explore modern society’s attitudes towards throwaway fashion,” said Jane Blohm, a fashion lecturer. “The project is a union between art and technology which explores the possibilities of using alternative materials for our clothing. “The wedding gown is perhaps one of the most symbolic garments in (a woman’s) wardrobe and represents the challenges of ‘throwaway fashion’.” She added: “In order to reduce fashion’s impact on the environment, the fashion industry must begin to challenge conventional attitudes and practices.” A survey in 2008 found the average cost of a wedding was now more than £20,000, compared with £14,643 five years ago. The average price of a wedding dress alone was £997.

The latest creation by Japanese fashion designer Tae Ashida is truly out of this world — an outfit twinning a blue cardigan and shorts made for astronaut Naoko Yamazaki. 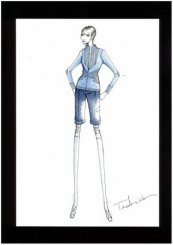 The US space shuttle Discovery blasted off on Monday with Yamazaki and two other female crew on board, bound for the International Space Station (ISS) on a historic mission that put more women in orbit than ever before. Ahead of her departure, Yamazaki, 39, asked Ashida, daughter of fashion guru Jun Ashida, to design her work clothes for the 13-day space mission and she came up with a slim knit cardigan in light blue with navy blue shorts. “As a female designer, I chose a design and colour with a sense of grace … so that she can feel at ease as she carries out a tough mission in a male-dominated, bleak atmosphere,” Ashida said on Wednesday. “It’s like a dream come true to see my clothes worn in space,” said Ashida. “I’m looking forward to seeing her wear my design.” Yamazaki also brought a miniature version of the traditional Japanese harp, known as a koto, to the station to play an ensemble with her countryman Soichi Noguchi, who has carried his Japanese flute to the station. Yamazaki asked a Japanese musical instrument factory to make a miniature version of the koto, which usually measures about 1.8 metres (six feet), to meet the size limit for her space shuttle cabin luggage. “The sound is quite different from that of an authentic one, but I’m very much looking forward to seeing her play the koto in space,” said instrument maker Kenzo Ogawa, who produced the mini harp. Japan’s astronauts have shown a penchant for space entertainment in the past. Last year Koichi Wakata performed a series of zero-gravity challenges, including testing a “flying carpet”, folding laundry and using eye drops in the ISS, videos of which were posted online by the Japanese space agency.

Grace Kim will be instructing a beginners Soft Circuit workshop this April! Soft Circuit will cover basics of wearable technology. Workshop participants will be given a historical overview of wearables in the context of fashion, art, and technology. Instructor Grace Kim will share basic sewing and embroidery techniques and tips on how to repurpose everyday sewing procedure for use in wearables projects. Students will be given project-based instruction on basic circuitry and will construct soft circuits using conductive thread and fabric. No prior experience with electronics or sewing required. All materials and fees are included. Limited space available. Will Feature: History and context Measuring energy Creating a circuit on a breadboard Soft circuit basics Embroidery basics Introduction to switches (including how to turn everyday sewing notions into switches) Introduction to resistance (including how to use a multimeter) Introduction to sensors Demonstration of advanced materials (different types of conductive fabric, felt resistors, LED-integrated fabric, el paper) Demonstration of LIilypad and other microcontrollers. Battery management Classes will be held: 1PM-6PM Saturday, April 17th Saturday, April 24th Register students are expected to attend both days. Email inquiries to: education [at] gaffta [dot] org Purchase your spot in the workshop here- http://www.gaffta.org/2010/03/31/upcoming-soft-circuit-workshop/