You be the voyeur

You be the voyeur from Kristina on Vimeo.

This month saw the first staging of ‘You be the voyeur’, an interactive performance piece which combines dance with wearable technology. It was premiered at NEoN Festival in Dundee. The performance takes place in a small dark space – in this case the back of a Ford Transit van. Each person is given a torch to find their own way in the darkness. When their beams of light discover a figure in the shadows the interaction of light on her dress creates synthesised sound. What follows is an improvised piece where movement, audience interaction and generative sound work together to create a one off performance. We were only able to video one of the rehearsals but this gives some idea of the experience. You can find more information and images on my blog http://arttart.wordpress.com/

Exercise Magic (teaser video) from The Amazing Rolo on Vimeo.

Here is a teaser video of the first performance of Exercise Magic!! a piece by Yann Seznec which I have been working on the costume for this month. The first performance took place at the CCA in Glasgow on Thursday night. Exercise Magic!! is based on “Real Results With Coronation Street’s Beverley Callard”, an aerobics video from the mid nineties. The performer exercises along with Beverley and friends…but who is controlling whom? Yann’s movements disintegrate, remix, and re-invent the video in real time, all whilst he’s getting fit and enjoying it too! 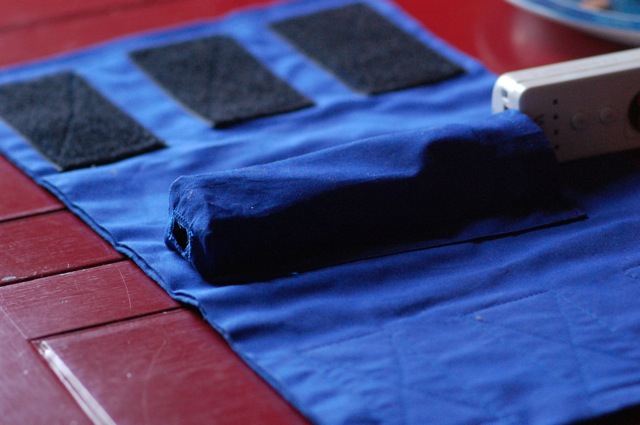 Yann wore a custom made outfit designed both to enable the performer to manipulate the video using wii-motes as sensors (attached with pictured custom wii arm-straps) as well as creating the sense of character needed for the performance (with shop brought sportswear). The data collected from the performers movements was then used to manipulate the sound and video in real time. I was really pleased with how the costume looked and integrated into the overall performance. You can find out more about the trials and tribulations of producing the costume for this on my blog.

Make do and Mend – Earpads

After months of the long cold walk to work (and back) my headphones had started to look a little bit worse for wear. The foam earpads (apparently thats what they are called) on my Koss portapro headphones had worn away and had tears along the edges. I looked into buying some new ones but I decided to try and make my own instead.

It’s pretty easy and quick to crochet little hats for each headphone and it looks cool too!

For anyone wondering what I have been up to I have recently been working on the prototype for a new project – the Hibernation Blanket. The basic idea is a crochet blanket laced with lights which pulse in response to your body heat. This can be used to snuggle up in through the long winter nights or it could be placed in the room and used as an alternative light source. For the prototype I have crocheted a swatch of fabric to test out the effect (as you never know it could have been a terrible idea!). It’s powered by a Lillypad arduino and as you can see it looks quite nice so the next step is to make the blanket… You can find out more about the stitches and wool I used on ravelry or check out my blog.

Following on from the UV Glove I have been working on a new project with Yann Seznec (aka The Amazing Rolo) to create a screen which generates sound in real time based on what is projected onto it. Here is a video showing the results in action using Walter Ruttmann’s Opus I and II to test the results. The Lumierophone (named after the Auguste and Louis Lumière) uses seven light dependent resistors sewn into the sheet with connective thread. The screen itself is made from a £4 John Lewis bed sheet and the components are hand sewn into the material. The synthesiser is then connected to the LDRs by metal popper buttons and needs no computer to run. For the prototype version we have chosen to keep the mechanism visible. In later versions I would like to experiment with using reflective fabric designed for projection and perhaps hide the stitching. (although I do enjoy the classic wearable aesthetic of visible stitching). The Lumierophone was presented last week at the Sounds of Silents study day at the University of Edinburgh and we are hoping to show it elsewhere in the near future… so watch this space. (also sorry to everyone who already read this on my other blog! http://arttart.wordpress.com/)

All is full of gLove!

Last weekend I collaborated with artist Yann Seznec (aka the Amazing Rolo) on a UV glove which allows the wearer to draw on a wall that has been covered in UV paint. This was a development on some work created by Yann for the exhibition Rough Cut Nation at the Scottish National Portrait Gallery (check out Yann’s blog!). Here’s a video showing a bit of the glove being made and then some shots of it in action at the exhibition:

UV LED Glove for Rough Cut Nation from The Amazing Rolo on Vimeo.

The glove is made from an ordinary Thinsulate black fleece glove from a second hand shop. In between the lining and the outer layer I connected the battery and then externally attached the resistor and two UV LEDs on the index finger. The LEDs are activated by touching the thumb and middle finger together. Initially we created a glove using a reclaimed switch, but this wasn’t really suitable for use with fabric and after a few two many demos at a gig and then some time languishing in my handbag on Saturday night it very quickly broke. We resolved the problem by creating a fabric switch using some embroidered (very badly, what would my old school teacher say?!) conductive thread. The two X points can be touched together to create a circuit. This is much more durable because there aren’t any moving parts which can be broken. Obviously the glove itself although functional is not very asthetically pleasing, I can imagine creating a much nicer effect with some better embroidary and homemade gloves (watch this space). Today was the last day of the exhibition but you can find out more about it on the gallery blog. Thanks to Patrick Hickey at Nipht Technologies for the UV LEDs. As with lots of projects like this the glove was made with the sage advice of Fashioning Technology!