The Wearable Tech Expo was held at the Universal City Hilton in Los Angeles last week (December 10-11, 2013). Commercial players in the wearable tech field gathered to present, share, discuss and inspire. Smart watches were well-represented as were activity trackers and major tech companies such as Adidas, Vuzix, Plantronics, Intel and APX Labs. 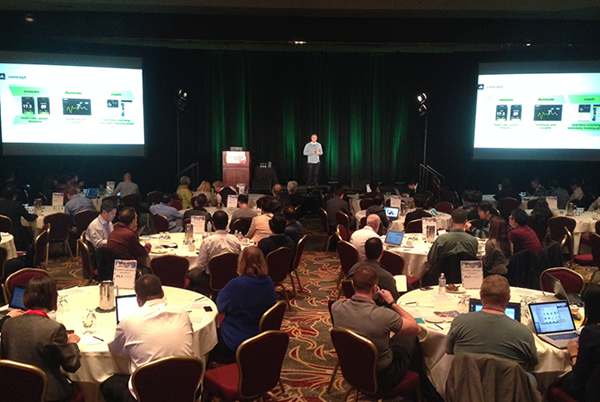 Because this was an wearable tech industry conference, most of the devices featured were those that can be worn on the body, rather than textile-integrated solutions.  This meant that for me, coming from a fashion, art and maker perspective, it was a great opportunity to expand my views on the field in general.  For example, if you’re from an arts background, you might not have thought much about wearable devices used in warehouse management. And who can blame you?  It turns out that logistics technology can actually be pretty cool.  I know, who knew?

Along-side the scheduled presentations, there were vendor tables set up for participants to demonstrate their products.  This included Clothing+, Pivothead, PLT Labs and Sensoplex, to name just a few.

Due to the commercial nature of the conference, forecasting was a hot topic and there was a lot of discussion around body “real estate”.  Would it be the eye, the ear or the torso that companies would be fighting over?  Despite (or perhaps because of) the number of really smart people attending this conference, no one seemed keen to throw their cards on the table and pick one.  Personally, I don’t see the need to choose, as each part of the body already has its own properties and functions that lend themselves to certain features and forms.

There was also much discussion over which category of wearable tech would win out between fitness, health, entertainment, etc.  Again, I don’t see the need to choose and see these as separate categories – each with its own merits and opportunities. 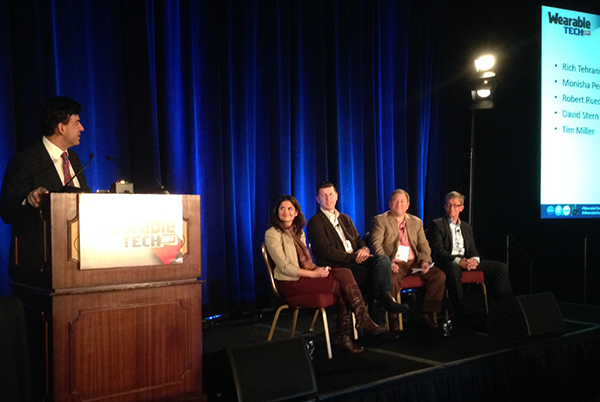 One of the best parts of the conference for me was the demo sessions.  My personal favorites were LumoBack (posture-correcting belts), Melon (EEG-analyzing headbands), Hexoskin (performance-tracking shirts) and Clothing+ (clothing with beautifully-manufactured conductive areas for use with sensor devices).

By far one of the biggest surprises in the demo sessions for me was PLT Labs.  The Labs are an initiative by Plantronics, a manufacturer of bluetooth earpieces. It turns out they have a long legacy in wearable tech, including the transmission of Niel Armstrong’s famous words “one small step for man…” in 1969!  Earlier in 2013 they opened PLT Labs as a way to both foster innovation and reach out to the maker and hacker communities.  They’ve already been involved in Hackathons across the US and seem to be having a great time both teaching and learning.  The developer version of their earpieces have super-responsive accelerometers, gyroscopes and magnetometers built in, and hackers have been attaching them to all parts of their bodies to come up with new ideas.  I have to admit, I didn’t expect to come across a company like this getting so excited to be a part of the maker community and I’d love to see other brands take a leaf out of Plantronics’ book. 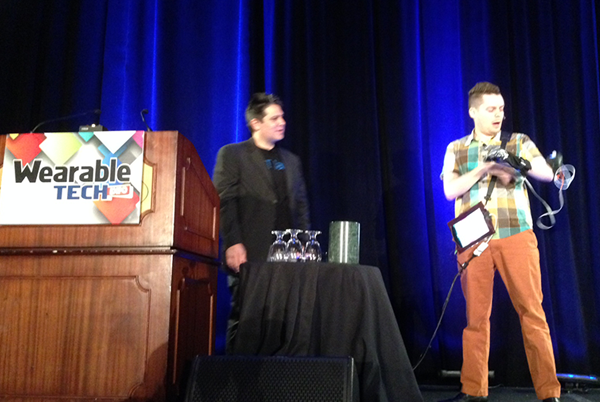 Ok, so on to the fashion: Syuzi’s talk on the relationship between fashion and wearable technology stirred things up a little.  With so many of the products and companies with their roots firmly in engineering and hardware, the idea of introducing values and practices from the fashion world seemed a bit alien to many attendees.  However, judging by the reactions both on Twitter and in person after her talk, I think this part of the industry could be described as “fashion-curious”, which is a good sign!

One of the final presentations was by Brent Heyning of ToyShoppe Systems.  This was billed as “Wearable Technology in the Entertainment Industry” and was aptly entertaining!  ToyShoppe’s impressive portfolio includes creating props and costumes for film and TV, many of them wearable tech.  Also on stage were Brian Walsh and Mike Elizalde from Spectral Motion Effects, whose work had many jaws dropping.  Brent had also invited collaborator Anouk Wipprecht to show what can be done with fashion, tech and imagination, plus Heather Vescent Schlegle (Purple Tornado), a financial futurist who is working on wearable currency concepts.  Her inclusion in the line-up shows how wearable tech only gets more exciting when people from different backgrounds get involved.

Halo- The LED Spray Can