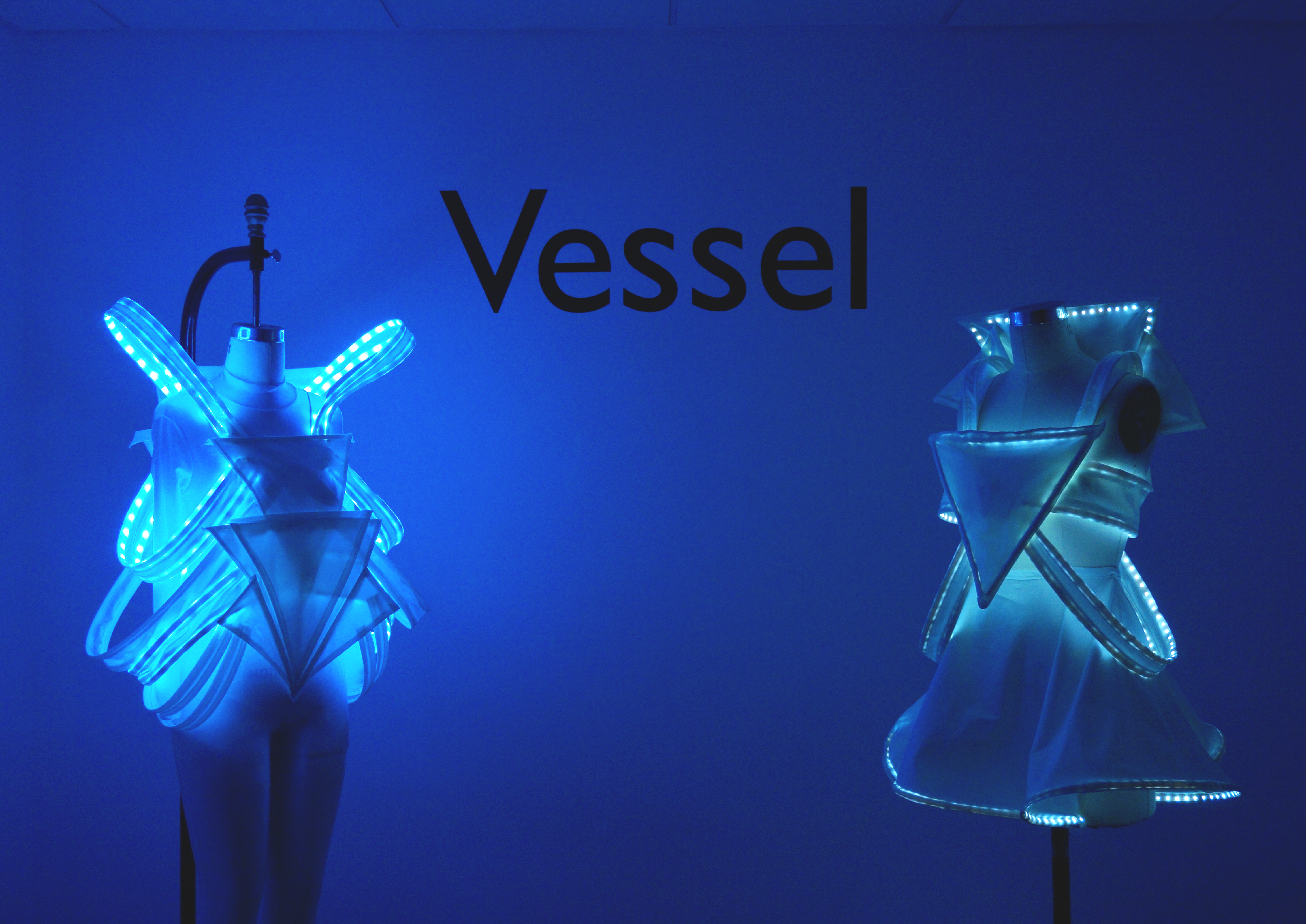 The desire to control women has been a subversive part of human culture for centuries. Be it a law passed, a vow forced, or “acceptable” women’s fashion, all undermine how a woman portrays her sexuality and purpose. The societal institution habitually requires these things and allows women to be simultaneously ridiculed for being too sexual and too modest. This forces women to walk a very fine line between the two, where every misstep could lead to being labeled the Madonna or the Whore.

During the first year of my Masters at Parsons the New School for Design I created the “Purity Pillow”. The Purity Pillow’s purpose is to prevent girls from participating in sexual activities, such as intercourse and masturbation. The pillow is equipped with a heat and light sensor to monitor the conditions of her bedroom. When the room gets too hot the pillow releases a high pitched noise. When the room gets too dark the pillow begins to light up and flash rapidly. If the room is not suitable at all for the young lady the pillow will activate both of the sensors to break the mood and prevent an amorous moment from happening. 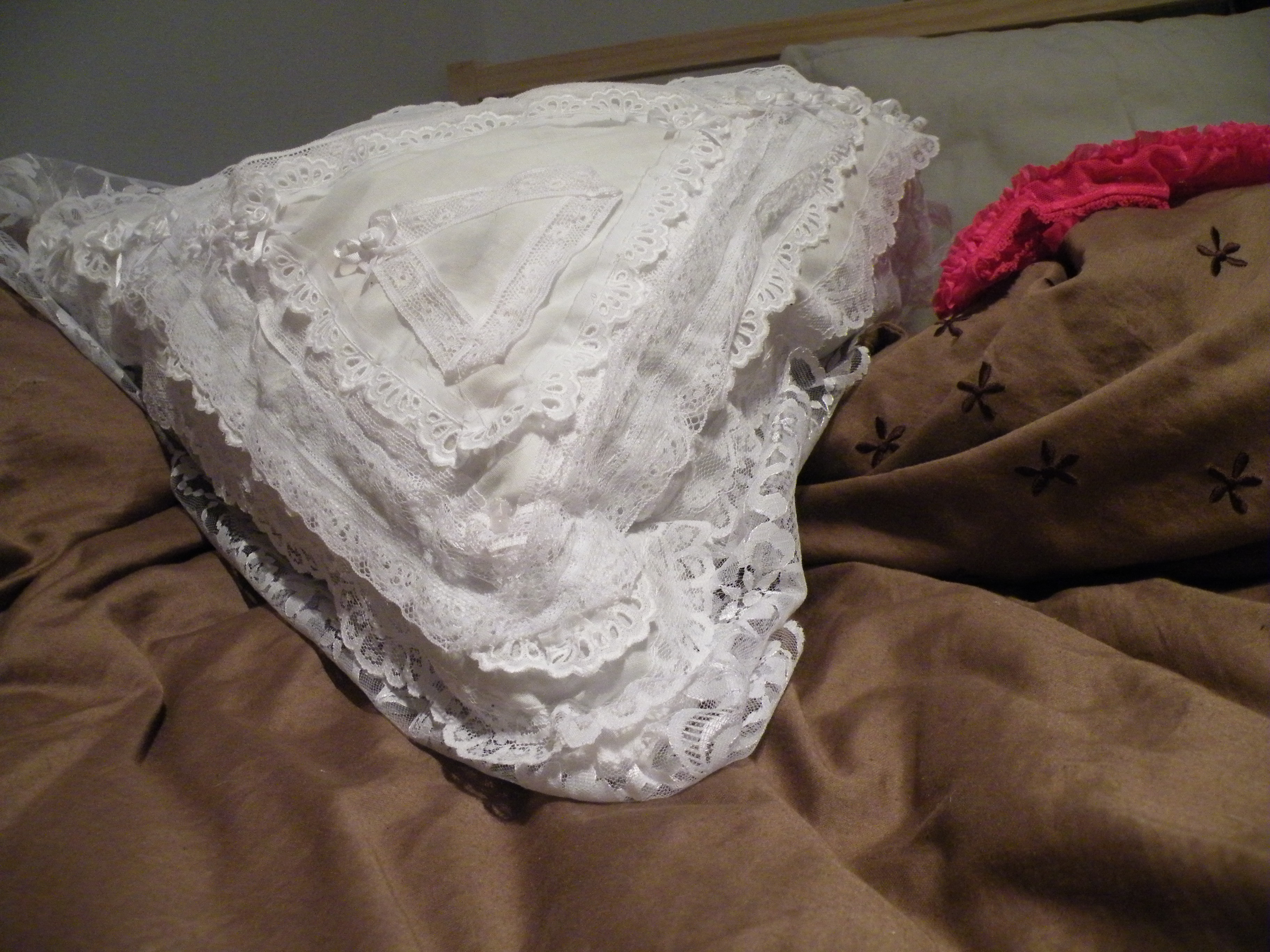 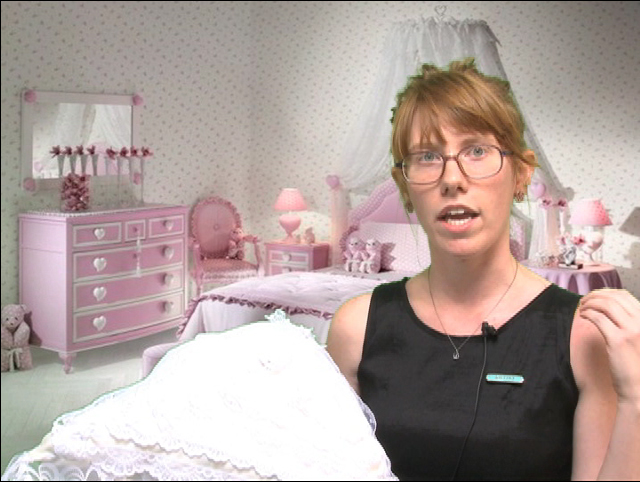 Digital Still from footage taken from

The Chastity Skirt is the second iteration in the evolution of my vision and direction. I adapted a hoop skirt and incorporated LED’s throughout and a tilt sensor in the lower front portion of the dress. The sensor activates the lights when the dress is lifted to an inappropriate height. The idea behind this form of chastity is the same as the purity pillow. It is unconventional. It is an unconventional form of chastity. Even if girls were to wear this dress it will not prevent them from indulging in sexual behavior. If something were to happen it would just make the situation noticed, comparable to car alarms. A car alarm does not actually stop the thief from breaking into the car. It just lets other people know what they are doing. 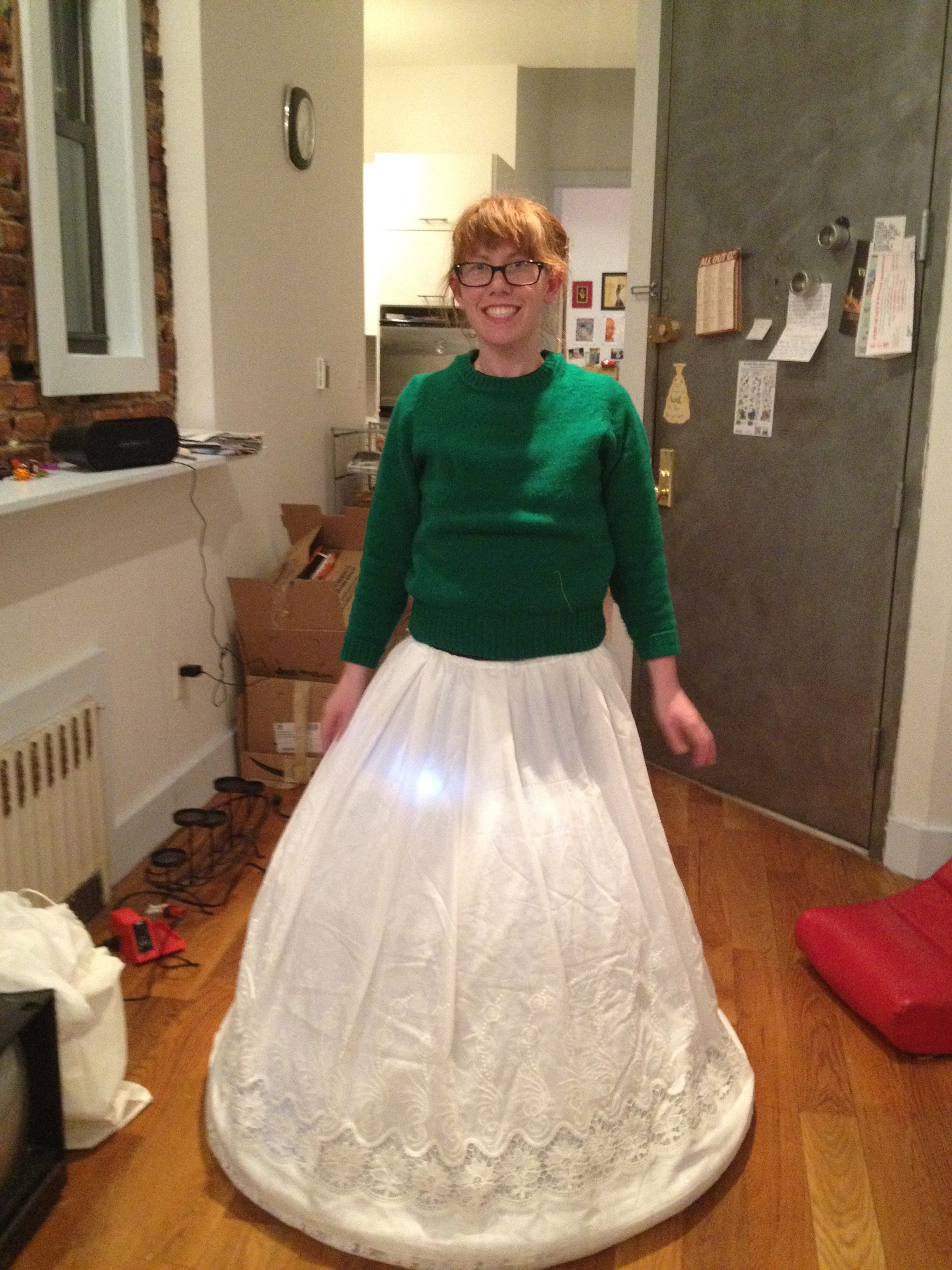 While prototyping dresses I continued research on materialized versions of chastity. Research continued on chastity rings, purity pledges, and then I came across Purity Balls. This is where I found strong foundation for my work. In short, Purity Balls are a combination of wedding/debutant events where daughters pledge their virginity to their fathers. Founded in 1998 in Colorado Springs, Colorado, it’s a ceremony where girls between the ages of 4 to 22 dress up in white gowns and prepare to make a vow of chastity to their fathers.  Purity rings, a sign of chastity, are also handed out at most of the balls. Research further showed that several of these abstinence only programs receive federal funding to promote their efforts.

The issue isn’t that they are promoting abstinence only; it’s that they are not educating people on sex. With no real intellectual progress achieved, the result is more likely kids having unsafe sex, spreading STD’s, and/or becoming pregnant. It’s not because they had sex before marriage, it’s because they aren’t educated about safe sex.

In addition to the spread of STDs and teen pregnancy, another issue stemming from this is Slut-Shaming. Slut-Shaming is the act of belittling women who engage in sexual activities. Some girls experience this after losing their virginity because their social environment teaches that they should save themselves for marriage. Some are told they are sinful because of how they behave sexually.  This became the driving force behind my designs.

I envisioned this as the conversation I wanted people to have while interacting with my dresses.  I continued experimenting with the hoop skirts but migrated to 1950s-60s housewife fashions. After constructing and altering several prototypes of the dress patterns that I worked with, I realized that I wanted something a bit more extreme. A dress that would push the limits of what women could be wearing. This is a reflection on my thoughts about Purity Balls and how extreme they are. The final design of the dresses is retro futuristic. Fashion that pushes and pulls from bauhaus, the Jetsons, Metropolis, and more. Triangles form structures that make up the garments and have an obvious play behind them. Lights, LED ropes, are lined along the inside edges of the dress. The focus for the lights is not only to illuminate the behavior of the young woman but also brings focus to her body with an inward luminance. 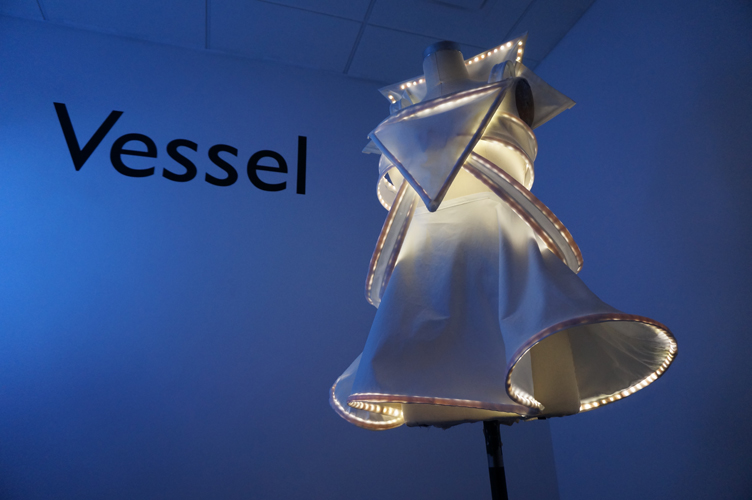 The Chastity Dress has sensors placed throughout it. If the woman touched inappropriately the dress lights up. This makes others aware of her behavior but also reminds the woman of her actions. 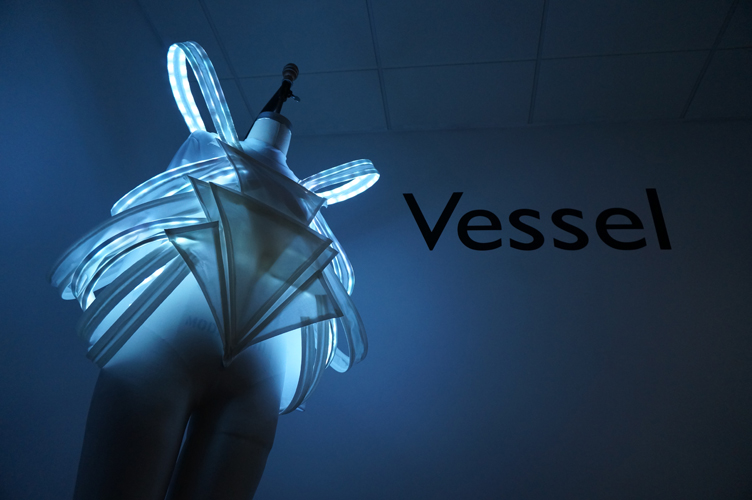 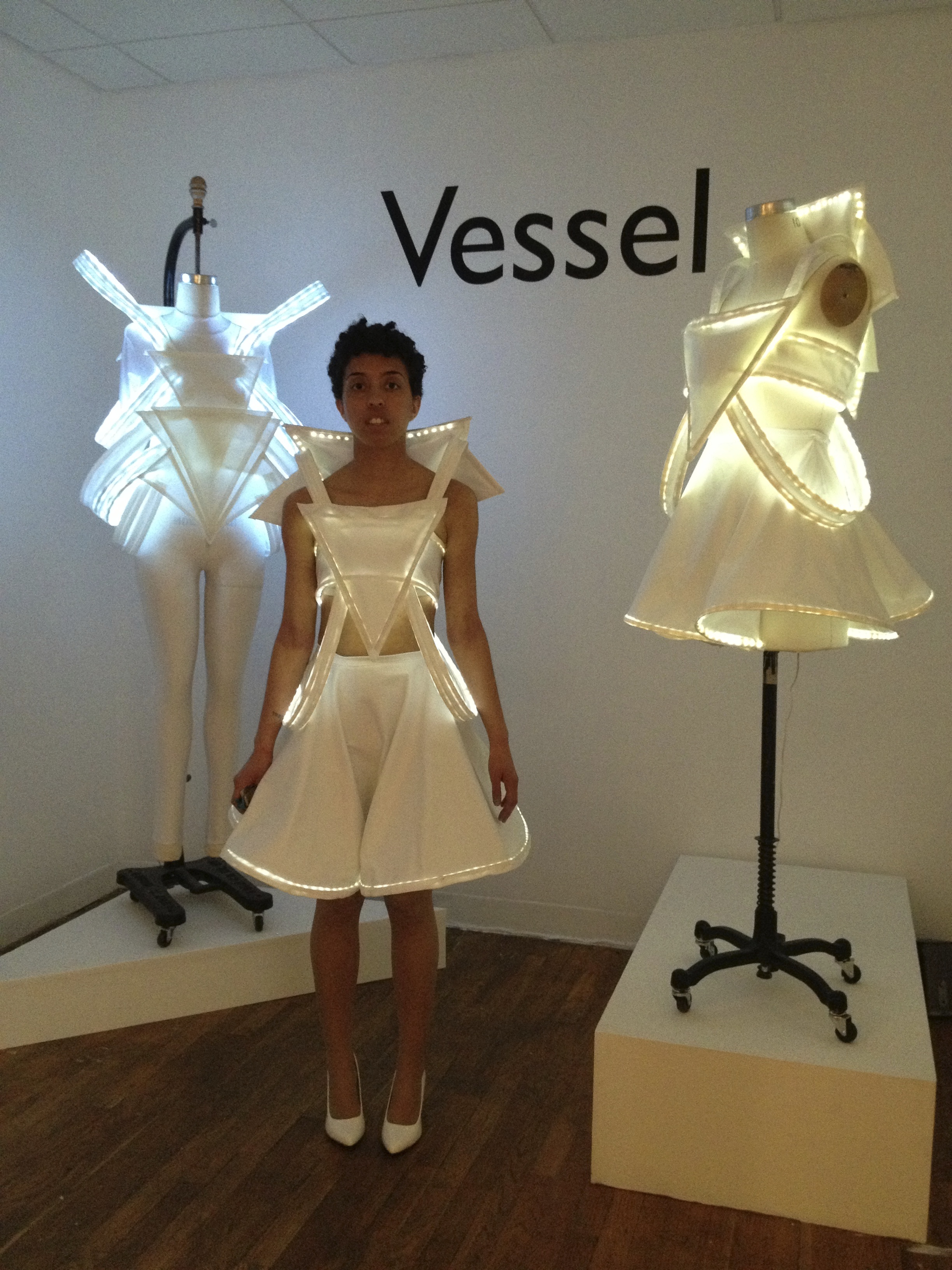 The dress was powered by lithium battery packs. So the model was able to wear the dress freely.

This is a  walk through of Vessel installed at Parsons’ MFA Thesis Exhibition. This exploration of the space includes the sound piece that was played with the dresses.

My dresses are straightforward in design and concept but are built on this idea of visually disembodying a female and viewing her strictly as a product of reproduction. I am combining humor and fascination in the dress to open a dialogue about ongoing issues. The issue of ownership of one’s body, and the education behind it. I hope people take away a sense of curiosity from my dresses and push to educate themselves on the array of issues concerning objectification of females.

This is Luxe: Fashioning the Apocalypse