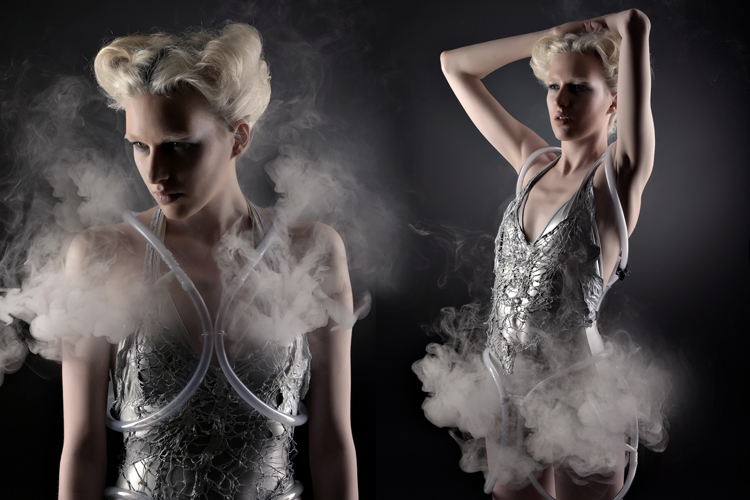 Recently developed as part of a TECHNOSENSUAL Artist-in-Residency at MQ, the “SMOKE DRESS” is a collaboration between fashion designer Anouk Wipprecht and technologist Aduen Darriba. The dress is a tangible couture “smoke screen” imbued with the ability to suddenly visually obliterate itself through the excretion of a cloud of smoke. Ambient clouds of smoke are created when the dress detects a visitor approaching, thus camouflaging itself within it’s own materiality. The “SMOKE DRESS,” with its loose net of metallic threads and electrical wire, works at the scale of the magical illusionists trick, permitting a hypothetical magician’s assistant to perform her own disappearing act! 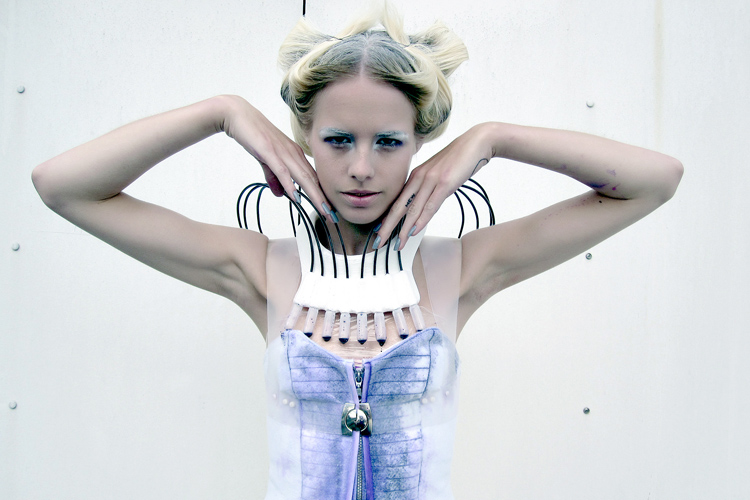 “PSEUDOMORPHS,” developed as part of the Summer Sessions at V2_ Institute for the Unstable Media in Rotterdam (2010), aims to be a “self painting dress.” With a built-in valve system, and several containers of purple liquid, the dress can be activated by the wearer (or viewer) in order to “stain” itself, thus bleeding a permanent colour stain onto it’s pristine white felt structure. Occurring as an irrevocable event, with the resulting dress forever carrying the mark of its “stain”—much in the same manner in which we carry our physical wounds or scars—the dress captures an unforgettable, and unique moment in time, something rare in the mass-produced landscape of fast fashion. Interestingly, the idea of the dress was “borrowed” by Britney Spear’s stylist for her hyperbolic 2011 video “Would You Hold it Against Me.” 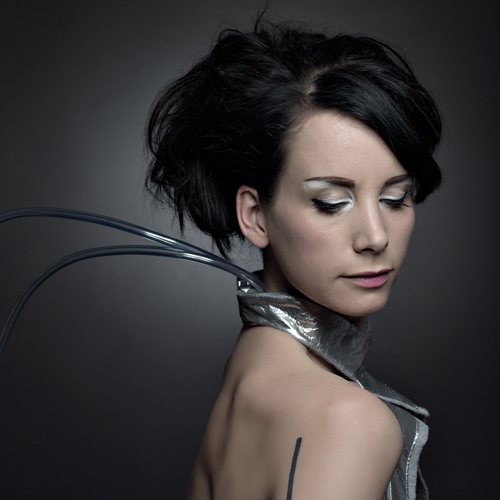 Q: What is your background?
I am an artist / designer, curator and lecturer from the Netherlands. Coming from a fashion design (couture/tailoring) & communication background (Netherlands 2000-2010) I started to occupy my agenda with interaction design classes and user experience courses during 2007 as a side study (Netherlands + Sweden) and graduated on both topics in 2010. At that time I freaked out with micro-controllers, tube systems, servo’s, sensors and mechanics in every spare hour I had left.

Q: What led you to your being involved in fashion and technology?
Regular fashion design bored me, and my interest in robotics and artificial intelligence went up, so I started to combine it; creating interactive creatures and ‘animating’ my designs. The body is a gorgeous platform for explorations of all kinds. By combining fashion with technology, a lot of unexplored territory opened up for me, and I finally could create the things that spinned my head. 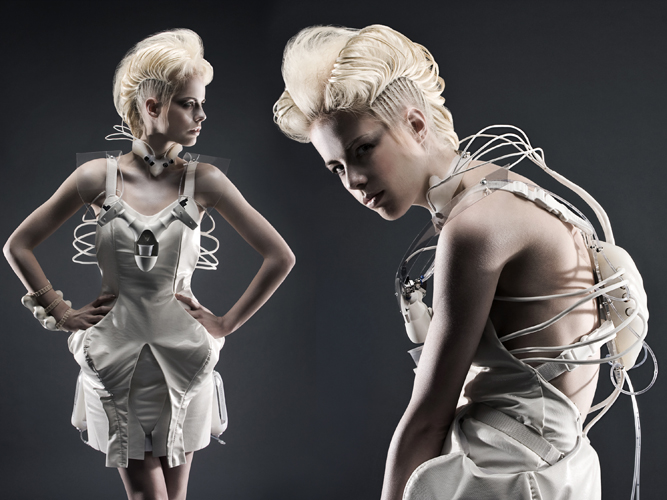 Q: What kinds of materials and technologies are used and integrated into your designs?  Could you describe the process / challenges / advantages of using these particular materials in fashion and garments?
I like to work with unusual and uncontrolled materials like fluids, smoke, inks, nano particles and foils to create effects around the body.   I prefer the word ‘organic’ over everything else and am interested in mimicking nature’s charming tricks next to working with sensitive and experimental high tech technologies rather than overdeveloped products.

While creating in the realms of fashiontech, I often collaborate with fellow artists, engineers, scientists, designers, universities and innovative companies to research new areas where expertise can be combined. This is a major advantage, especially when there is a good ‘flow’ in a team, this makes a project really magical. Challenges come and go, some more evil than others, but without them there is no space for innovation.

I am working at this moment close together with Viennese software engineer and hacker Daniel Schatzmayr on a series of robotic dresses for a stage setting and there are always a lot of problems that occur; from design complications to technical disturbances, ‘how to power’ your design, making low weight and practical wiring / storage settings, agreeing upon interaction, and creating a comfortable user interface situation for the wearer. Next to last minute short circuits crisis, late night coding and system fails; during showcases, you often get a design to perform correctly after some tweaks in the last 5 minutes. You can basically just wait for that to happen. I think that challenges come and go, some more evil than others, but without them there is no space for innovation nor exploration. 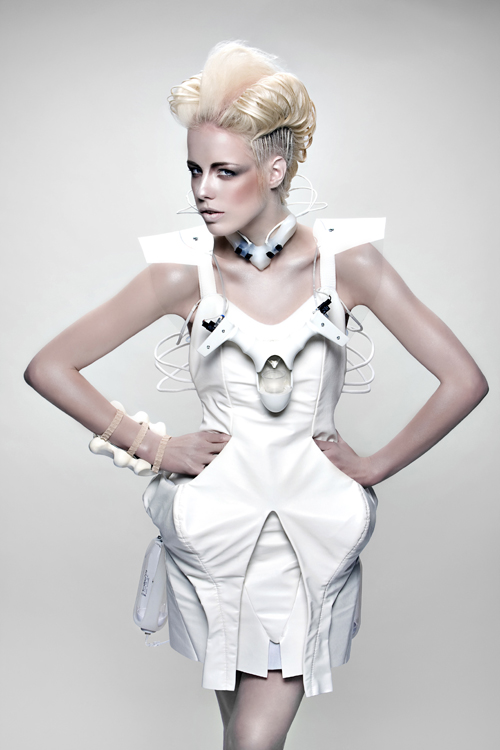 Q: What does technology add to fashion?
Technology combined with fashion creates new ways of communication between people, a new relationship between interface and the body, and a new connection of the body with technology. For me it is a playful exploration, where the body is the platform of interaction and expression.   The position that technology has in our society (i.e. to ‘please’ us) will get more and more intimate, and as technology crawls closer to the skin we will need to start to rethink and recreate the relation that we have towards technology. In a way, communication-wise, techno enhanced fashion has the potential to mediate a human in more ways than a human can mediate itself. Therefore, amongst other reasons, I am interested in how emotional, social and psychological processes can be influenced using electronics as an extension of the self.

Q: If you could have anyone alive or dead wearing your fashion-tech design, whom would you pick, and where would they be?
Mostly a Scandinavian-look ash blonde model with a milky skin color. Any persona that gives the notion of a blank canvas for me, in where electronics or technology can be the source. Minimum expression, as the tech-enhanced parts should do the ‘work’ (interaction/expression/communication). Leaving the persona just to ‘be”.

Q: How do you envision the everyday fashion-tech of the future?
We will establish new connections – both with the garments around us, as with the space surrounding us. 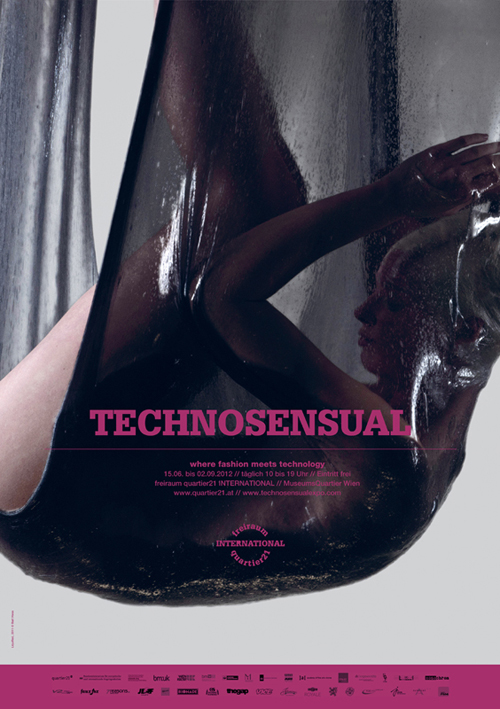 Q: What do you think is the importance of the TECHNOSENSUAL exhibition?
The importance of the TECHNOSENSUAL exhibition for me, personally, is to inspire people and to give a glance of possibilities that occur when fashion and technology are combined. This way I hope to stimulate more designers, engineers and scientists to take a step in areas that might be unknown to them. We want to involve visitors in projects that are out in the world but stayed hidden in design and research studio’s; some of the designs in the TECHNOSENSUAL exhibition people might know from books or blogs, but have never been displayed before. As we live in a society that makes 3D models out of merely everything, the promised interaction of these mediated projects could also be hoaxes.

At TECHNOSENSUAL the visitors get an overwhelming amount of animated, responsive, and interactive designs that they can experience first hand. While the exhibition’s side program is created to stimulate the production of new works due to its Artist-in-Residency program and accompanying framework of workshops and symposiums, giving artists and audience the chance to explore new fields and practices. The exhibition brings designers, engineers and scientists closer together within the realms of fashion and technology, while also functioning as a platform for innovation. 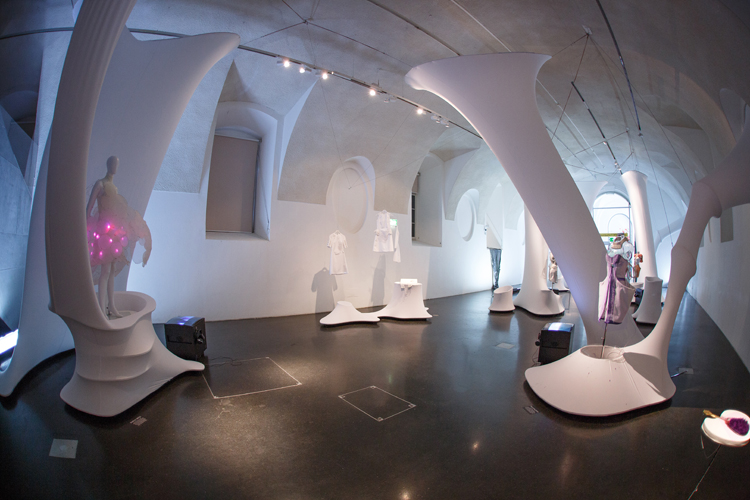 Q: The TECHNOSENSUAL catalogue is now in full production. What will we see and discover in it that we didn’t see in the exhibition? Where will we be able to get our hands on a copy?
The catalogue gives a little sneak-peak behind the whole project; it features interviews and behind the scenes pictures with the TECHNOSENSUAL Artists-in-Residency’s, project descriptions and background information on the exhibition concept and design. It’s an 120 pages catalogue that is in production at this moment, to be released at the beginning of December. The catalogue will be in a selection of stores in Vienna and can be purchased through the internet. Keep an eye on the TECHNOSENSUAL website at the beginning of December 2012.