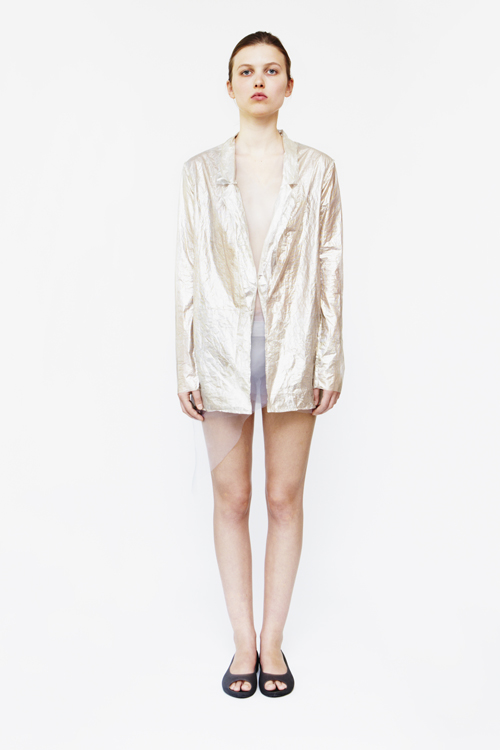 Ying Gao’s “PLAYTIME,” inspired by French film maker Jacques Tati’s 1967 movie of the same name, explores our slippery, and often plain old clunky, relationship to technological advancements. Where Tati proposed an ironic and humorist critique of Modernism’s overtaking of human agency—with automatic garage doors and self-cooking kitchens going awry—Gao looks at the intangibility of grasping our immediate technological environments. With “PLAYTIME” we are offered garments, which eschew documentation by kinetically blurring out (through rapid movement) their own image when being photographed. Like an unruly portrait subject, these garments resist photo documentation—arguably one of the key operatives of the fashion industry—to give us nothing more than a fleeting view, more like the runway performance than the photograph. 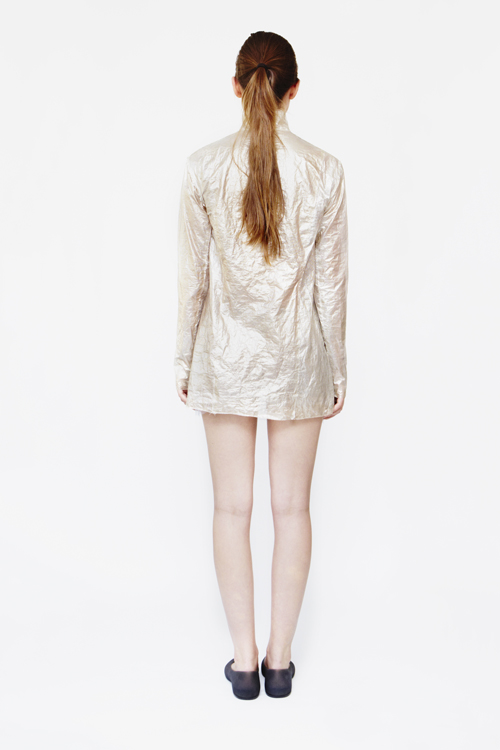 It is as if we have gone full circle from Eadweard Muybridge’s use of the camera apparatus to reveal more about the physical world—remember Muybridge first used his stop motion photography to prove that a horse was able to have all legs up in the air when running—to the physical world enacting strategies to hide itself from capture. “(NO)WHERE (NOW)HERE” is a new piece developed while in residence earlier this year at the Quartier21 and features high-tech perception-altering gold encrusted fibres. The garment has the ability to showcase two silhouettes: that of an exterior shell, and that of a “glow int he dark” interior shell, all depending on ambient lighting conditions. 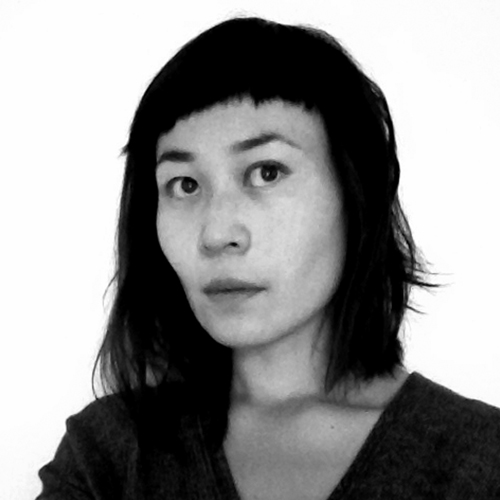 Q: What is your background?
I’m a fashion designer and professor at Université du Québec à Montréal (UQAM). I graduated from both Haute École d’Art et de Design de Genève (HEAD) and UQAM. I’ve been working as a fashion designer for 15 years. I started to be interested in new technologies and media arts while I was completing a master degree in Interactive Multimedia 13 years ago.

Q: What led you to your being involved in fashion and technology?
The desire to experiment and expand my horizons. 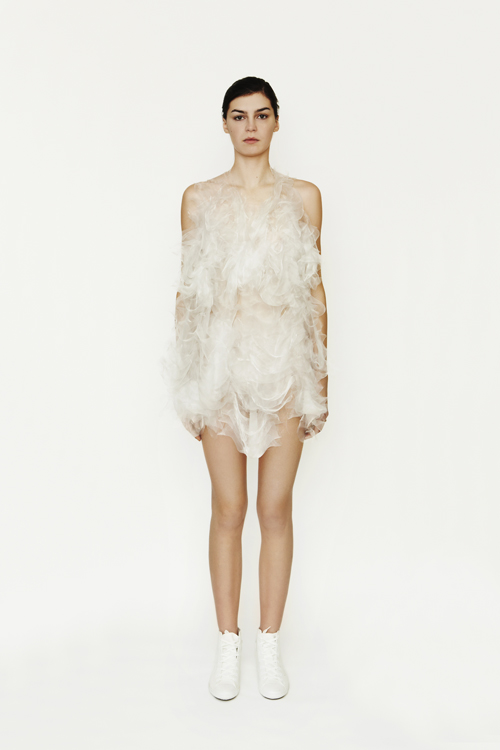 Q: What kinds of materials and technologies are used and integrated into your designs? Could you describe the process / challenges / advantages of using these particular materials in fashion and garments?
I use two distinct methods of integrating technology with fashion design: The first method is direct, meaning the microelectronic technology is physically integrated into the garment. The challenge, in terms of fashion design, is to construct garments with free-flowing dimensions affording the potential for numerous shapes, unlike the fixed measurements of so-called traditional garments. My interactive projects propose an in-depth study on the garment’s adjustable structure and the integration of pneumatic and interactive technologies. These garments appear vivid, ephemeral and fluid in shape: one of the dresses vibrantly unfolds when triggered by a ray of light. Another one breathes gently as it is touched by a gust of air. The variety of physical shapes emerges from the art of folding paper, giving a poetic aesthetic form to the ethereal and intangible. It forms a creative framework in which media devices (sensors, cameras, microprocessors) become components of garments.

Secondly, I use the indirect method. Technology is my source of inspiration, it is the base of my creations, but invisible on the garment. Some works are based on the unconventional application of software. “Indice de l’indifférence” used the data of an online survey to modify the pattern, angle and width of a man’s shirt according to the indifference of voters. In “(uni) forms,” a morphing software rendered new uniforms within seconds, ignoring their social implications. 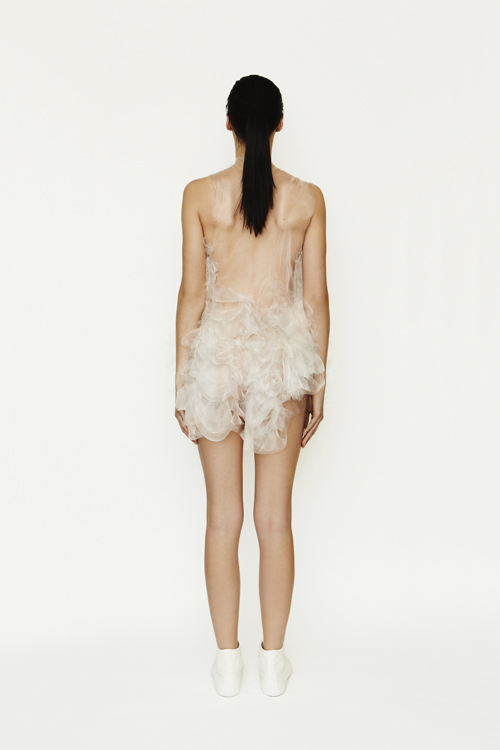 Q: What does technology add to fashion?
I often say that fashion is a sort of “encounter with time.” The future belongs to those who use the technologies of their time. BUT: Both technology and fashion embody the most fragile and ephemeral aspects of our culture, insofar as that which is cutting-edge today will be old news tomorrow. Fashion designers have known for a long time that they are working with a fleeting material that will never be timeless. However, the integration of electronic technology seems to modify the creative process, both in terms of the surface and the structure of garments.

Q: If you could have anyone alive or dead wearing your fashion-tech design, whom would you pick, and where would they be?
A wooden dress mannequin. 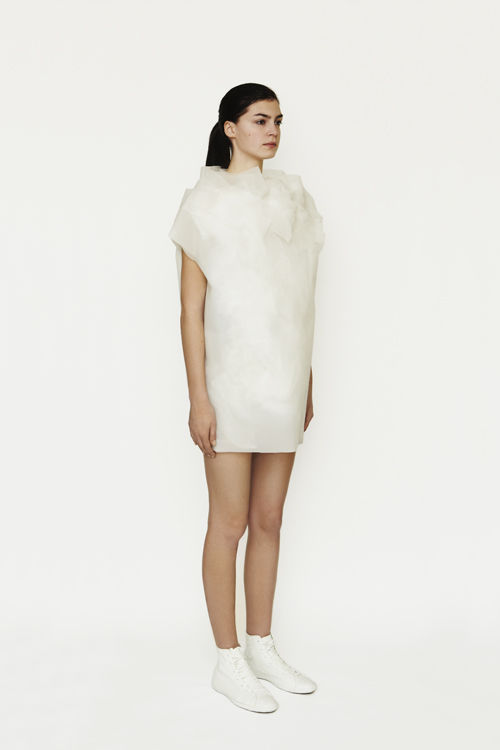 Q: How do you envision the everyday fashion-tech of the future?
In certain areas such as sports, military, and medicine, yes, it’s already there. I wonder if our everyday wear will become communication tools in the near future, even if methods are developed to facilitate the integration of these devices. 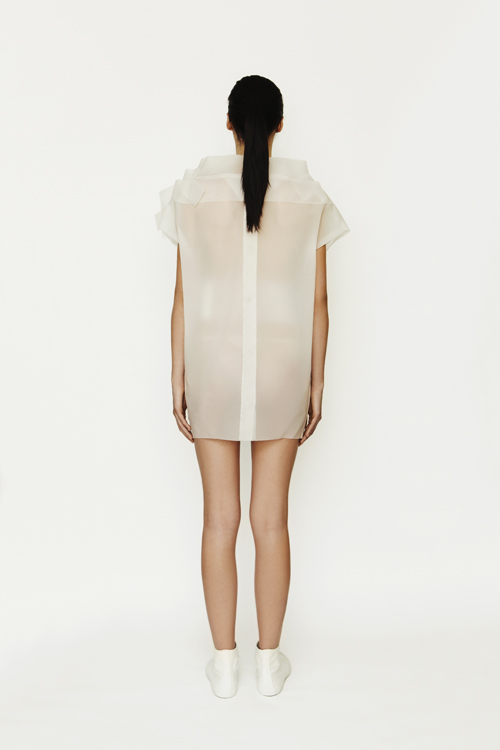 Q: Tell us about the piece you developed at Quartier21 during your Artist-in-Residency.
The use of the sham within the fashion system is at the core of the conception of the pieces in the series “no(where), now(here)“. Two “sham” garments will allow the public to get a feel of the illusion and repetition that fuel the inner workings of the collection.

Two pieces of clothing; the first is made from a stiff material, it is visible from afar, in day or artificial light. The second is made using photoluminescent thread and pigment, it is visible up-close, in darkness. The two pieces are suspended on a hanger, the first superimposed over the second. A proximity sensor connected to the lighting system detects the presence of the spectator; when he or she enters the room, the lights go on and the first piece is visible, when the spectator leaves, the lights go out and the second piece “unseeably” shows itself.

This play of light and darkness reveals the truth of the forms, and brings to light the pieces’ representational relevance. Their presence is so ephemeral and deceptive that they don’t seem to exist in space and time at all. Are these objects real, or not?

This game of perception and illusion plays with what is not quite real, despite the concrete reality of the objects themselves, whose forms are shaped by the darkness, providing a response to the light.