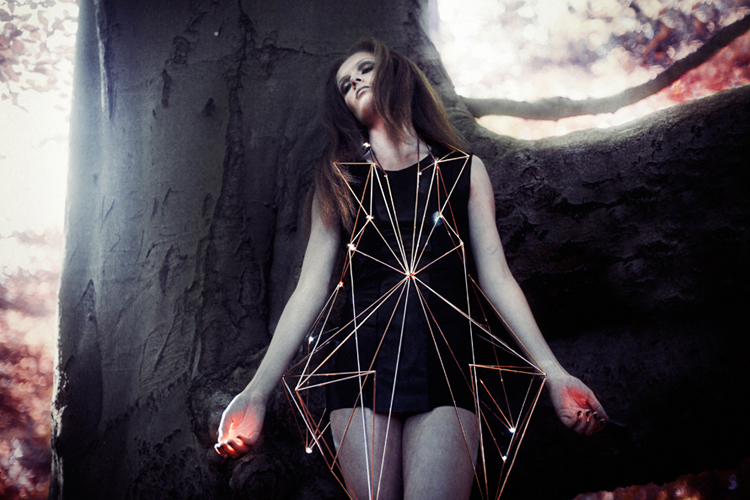 Constructed from a hacked 1990s lie detector and a novelty shocking pen, Melissa Coleman’s “THE HOLY DRESS” is not for the weak of conscience. Fabricated as a large gold star-shaped armature-like array of LEDs that sits atop a white form fitting dress, “THE HOLY DRESS” invites the viewer to place her/his hand on a metallic “lie” detector and speak to the dress. When (or if) the speaker displays vocal stress, the dress both illuminates and administers a shock. When worn on one’s body, it has the ability to function as moral apparatus of “sousveillance,” the act of self-surveillance, encouraging its wearer to deliver “truth” utterances, or suffer the immediate physical repercussions. 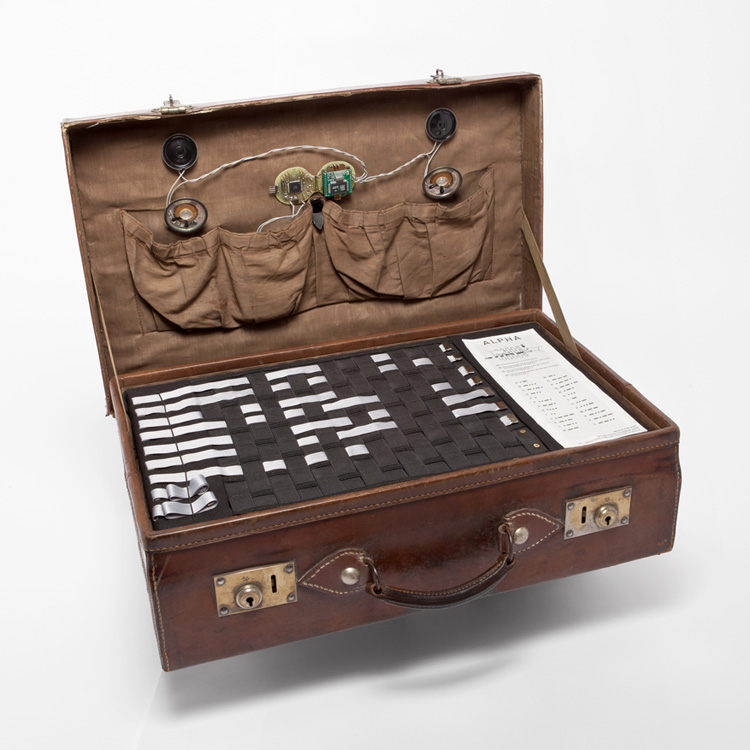 Alan Turing, British War World II code breaker extraordinaire, was also in his essay writings a positive proponent for the abilities of computers to benefit human kind’s cognitive and expressive abilities through their capacities for large data storage and processing. “MEDIA VINTAGE” as a project seeks to re-materialize digital media though the means of textiles and clothing. “MEDIA VINTAGE ALPHA” is a suitcase with a re-mediating ribbon platform that can be used to write analogue morse codes. “MEDIA VINTAGE CHARLIE” is a trench coat carrying textile punch cards on which are contained audio files of the childhood memories if an American man born in the 1920s. Situated somewhere between the early concepts of media storage such as Vannevar Bush’s “memex” (a hypothetical proto-hypertext media storage system he envisioned around 1945)-and today’s notion of portable data storage platforms as seen in cloud computing to mobile phones, “MEDIA VINTAGE” can be understood as a trip “back to the future” of technology to better understand present day data storage and computation. 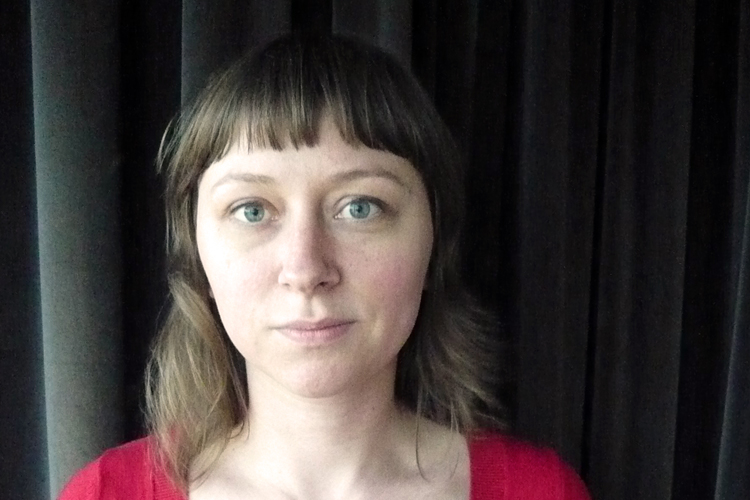 Q: What is your background?
I have a Bachelor of Science in Computer Science and a Master’s in MediaTechnology from Leiden University. I currently lecture at art and design schools, curate a traveling exhibition [entitled PRETTY SMART TEXTILES] and make interactive art. I do some programming on the side and host e-textile expert meetings at V2_ with Piem Wirtz.

Q: What led you to your being involved in fashion and technology?
During my Master’s I started making interactive art focusing on the body and technology. Clothing—and later fashion—was inevitable. It’s really the most natural interface for the body after one’s own skin.

Q: What kinds of materials and technologies are used and integrated into your designs? Could you describe the process / challenges / advantages of using these particular materials in fashion and garments?
In “THE HOLY DRESS” we’re using brass wire that’s been hard soldered and coated with a copper layer to create the cage-like design. The lights that have been glued on the inside of the design are connected to the back of the dress with very thin copper wire. The advantage of using copper on copper is that the wiring is nearly invisible unless you look up close. The challenge is you have to be very careful with isolating the wiring to avoid short circuits. 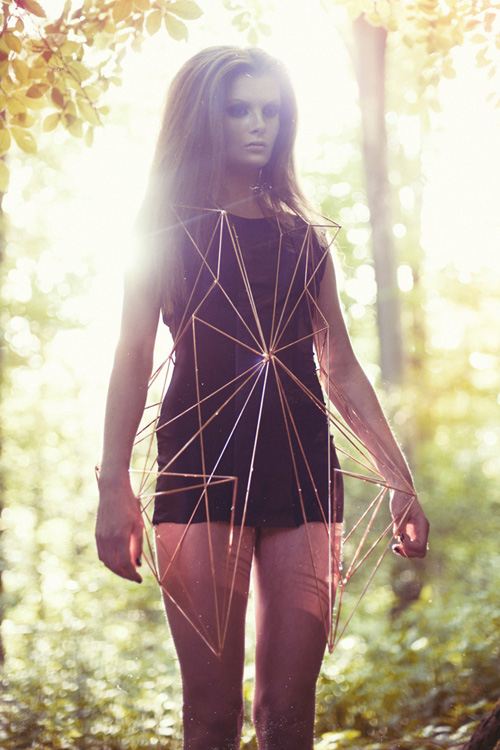 Q: What does technology add to fashion?
The potential for transformation.

Q: If you could have anyone alive or dead wearing your fashion-tech design, whom would you pick, and where would they be?
Loie Fuller, the first light designer. She would have understood the poetry and potential of wearable technology. The arm extensions she made for her serpentine dance were basically analog wearables.

Q: Tell us about the piece you developed at Quartier21 during your Artist-in-Residency.
“THE HOLY DRESS” was developed together with fashion designer Leonie Smelt. Joachim Rotteveel did the metal work. “THE HOLY DRESS” is a wearable lie detector that punishes you through an electric shock if you don’t tell the truth. By wearing the dress you have the opportunity to become a martyr for truth.

RiSR – A Wearable Sensor Network that Helps You Land Dates

Interview with Davide Vigano of Heapsylon