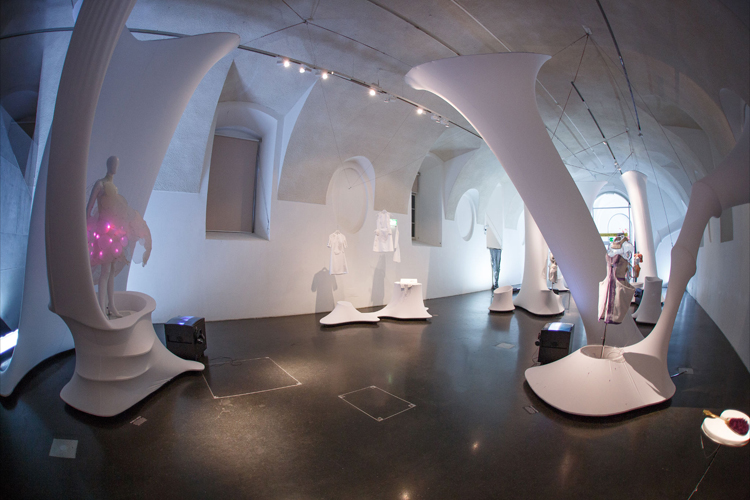 The “TECHNOSENSUAL. where fashion meets technology” exhibition taking place within the context of the Summer of Fashion at the Museums Quartier in Vienna, Austria (June 15 – September 2, 2012) explores the convergence of sartorial design and material/technological research. Curated by Anouk Wipprecht, and presented in collaboration with Monochrom and Quartier21, the exhibition also featured a series of performances (Bart Hess, Benoit Maubrey) talks (Sabine Seymour), and workshops (Kobakant, Mz Balthazar’s Laboratory) as well as an upcoming end symposium, which I will be moderating August 29, 2012.

TECHNOSENSUAL hosts an exciting collection of current haute-tech couture developed in recent years across Europe. Coalescing textile, fashion, material, and technological experimentation towards innovative outcomes, the exhibition showcases future-looking techno designers who are truly at the cutting edge. Almost all the works in the exhibition are unique pieces, one-of-a-kind designs, explorations, and prototypes—some of which were recently produced within the Quartier21 Artist-in-Residency programs also coordinated by Wipprecht—that have either never (or rarely) been seen in an exhibition, or that will likely never be seen within such a expansive grouping. 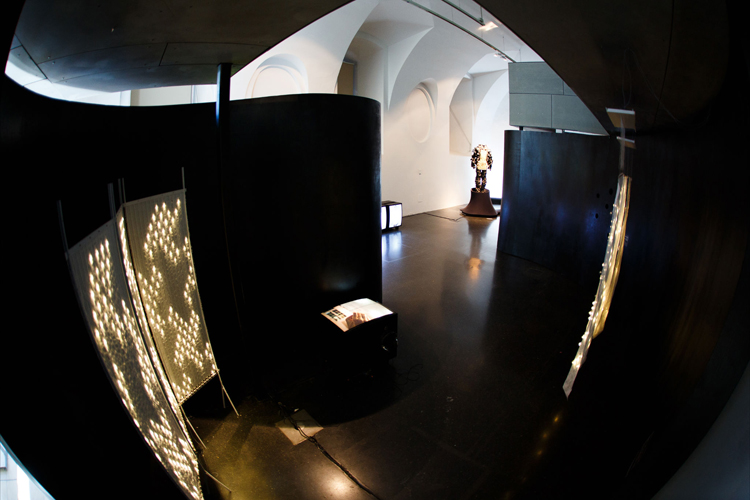 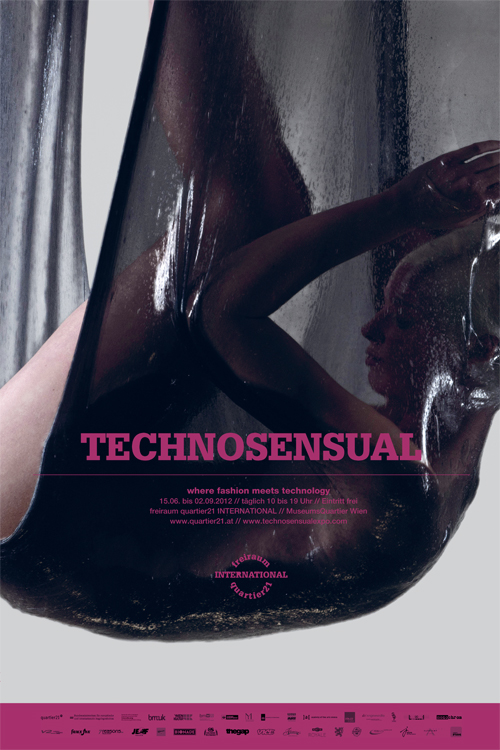 Much of the exhibition is centered on displaying speculative design scenarios. Truthfully very few of the garment designs presented could function aesthetically or mechanically off the catwalk or outside of a gallery setting. However, these practical handicaps do not render the designs irrelevant. Far from it, the works in TECHNOSENSUAL charts the modalities (and technologies) at the vanguard of networked and sensor-based clothing already, or soon, inhabiting our garments and bodies. More than mere stylistic propositions, these works raise deeper questions about our relationship to technology as it ubiquitously, and seamlessly bleeds into objects of quotidian interaction, exchange and expression. This is not just a show about the power of gadgets, but rather about the intimate negotiations we—as bodies and individuals—are embarking on with the digital world. 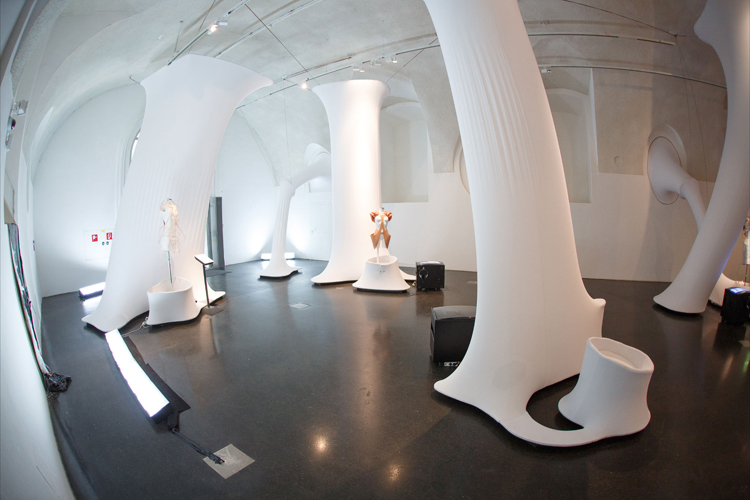 One of the questions that Wipprecht as curator asks in pondering this techno-fashion future is: “Will we become super sensory, physically aware of data flows, communicating our internal states through the garments we wear? Or will our smart clothing spy on us, betraying our confidence and making us dependent on technology?” Because wearable technologies are housed on our bodies, and hence primed for unique access to our physiological data, geo-specific locations, and relative encounters, fashion-tech is also a next logical frontier for ubicomp and mobile technologies. This merging of computer science and textiles industries was confirmed at the recent 2012 Smart Fabrics Conference where Apple and Microsoft attended in large numbers. The presence of these computer monolith’s at an apparel and soft goods conference indicates computational and mobile technologies industries moving towards (or at least exploring) the body-worn, and pliable platforms of e-textiles in the very near future.

“…technology is already a part of us, and we are a part of it as it is a product of our crafting, and imagination.”

However, if we look in the emerging field of technoscience criticism, theorists such as Isabelle Stengers, and Jane Bennett, propose that this dividing line between matter, technology, and our bodies has always been artificially drawn. They describe our own human technicity—from our abilities to read, write, as well as tool making, and using—as irreducibly imbedded in who we are as physiological and sentient beings. Hence, from this purview, technology is already a part of us, and we are a part of it as it is a product of our crafting, and imagination. In a future where bio-computing and other non-silicone forms of circuit building are emerging as we speak—hemp knitted computers? saliva-fueled phones? who knows, the material future is still a wide open frontier—the distinctions between natural, and artificial—or technical, and human—are only set to become hazier. We are soon to encounter increasingly hybrid forms of computer/clothing/somatic/sensing/fashion/objects that will be potentially indistinguishable from techné or organic. (If you are unconvinced, just think of GMO such as fruits and meat, these engineered bio-organisms are just one of the many examples where technology and nature are both.) 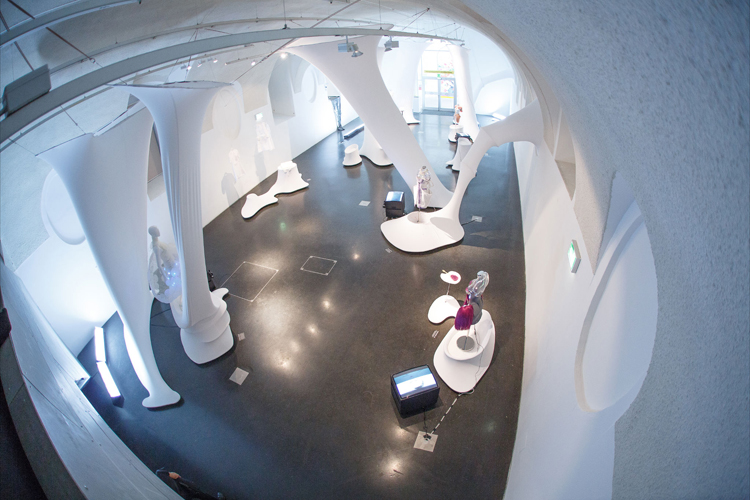 TECHNOSENSUAL invites us to imagine this exciting evolution of our human materiality, and technicity, and to envision, customize, demand, as well as design this next post-silicon revolution specifically through the means of fashion tech…before others do it for us!