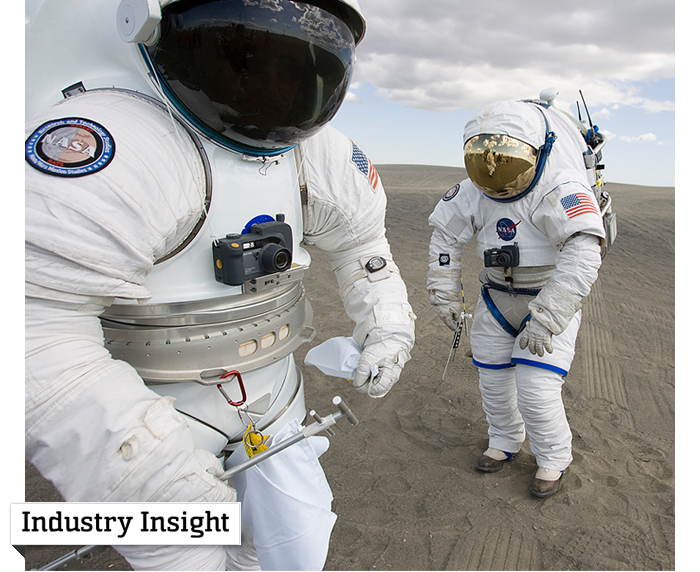 Spacesuits are THE ultimate example of wearable technology.  The pressurized suits provide astronauts with oxygen, water,  a temperature-controlled environment, and protection from space debris. Without these high-tech suits, astronauts could not frolic around the moon or leave their spacecraft for exploration or repairs.

The problem with spacesuits is that they aren’t very wearable. The suits and gloves are stiff limiting the astronauts comfort and mobility. NASA’s continuous mission to make spacesuits more “wearable” has led them to a unique collaboration with students at the University of Minnesota.

Fashioning Spacesuits is a three part series that explores the unique collaboration between NASA and a handful design students as they embark on a mission to address particular problems related to human spaceflight, which wearable technologies could solve or enhance.

The first part of the series begins with an interview conducted by Valérie Lamontagne of 3lectromode with Dr. Lucy Dunne, an apparel designer with a computer science and engineering background and Cory L. Simon, a systems engineer with a background in human computer interaction. 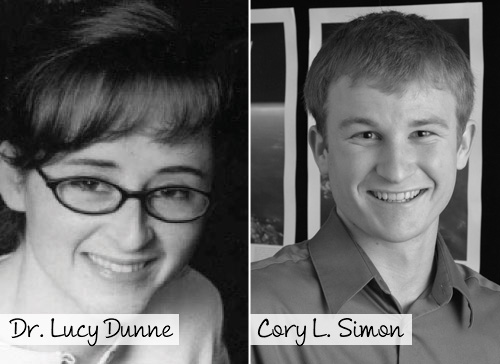 What is your background?

Dr. Lucy Dunne: I have a Bachelor of Science and Masters of Arts in Textiles and Apparel from Cornell University, an Associate in Applied Science in Electronic Technology from Tompkins-Cortland Community College, and a Doctorate in Computer Science from University College Dublin.

So, it’s a mix of Electrical Engineering, Computer Science, and Apparel Design, heavy on the apparel.

Cory L. Simon: I graduated from Iowa State University in 2008 with a Bachelor in Computer Engineering and from Georgia Tech in 2011 with a Master in Human Computer Interaction. While pursuing both degrees I worked as a cooperative education student (co-op) at the NASA Johnson Space Center (JSC) – this is similar to an internship, but requires multiple semesters of work alternating with semesters back at school.

What led you to working in wearable technologies?

L.D.: Somewhere around my second year of my undergrad I happened upon functional apparel design (having tried costume design and fashion design) and found it to be a really good fit for my interests and abilities.

I started concentrating in that direction right away, and happened to be lucky enough to have some amazing mentors at the time (my advisor Susan Ashdown and my professor Laurie Welch), coming out of the functional clothing program at Cornell started by Susan Watkins (who is still one of my most valued mentors and now a my co-author on a new project).

At the time wearable technology was just beginning to gain ground, mostly through the developing field of wearable computing, and it seemed to me to have a lot of really exciting potential. So I started focusing on wearable technology my third year in college, and interned at the now defunct but somewhat legendary Starlab in Brussels that summer, working on smart clothing.

It developed from there – I started working on projects and was still in school, so it was reasonably easy to pick up skills outside of apparel along the way, and even more so as I moved into various graduate degrees.

C.S.: I became aware of wearable technology early in my time at Georgia Tech (Thad Starner’s Contextual Computing Group was just down the hall), but I didn’t dive into the field until summer 2010 at the JSC co-op. We had a small amount of funding to investigate Smart Fabrics and how the field could be applied to human spaceflight.

I spent several months reading research and reaching out to the community, to then put together a final report and recommended some future work. When I came back to JSC full time I received a bit more funding to develop one of the concepts and have continued the work since. I find the challenges and opportunities of wearable computing very exciting and I’m optimistic NASA will continue to be active in the field with the help of external collaborators like Dr. Dunne and her students.

How and why did the collaboration between NASA & College of Design University of Minnesota students come about?

L.D.: Cory was developing a concentration in e-textiles at JSC, and came across my group’s work. He was in Minnesota and came to visit the lab, and it became clear that we had a lot of overlapping interests. He put me in touch with the Minnesota Space Grant, and through that we were able to develop a project through one of my courses (Functional Apparel Design). The space grant also funded two of our students to do internships at JSC this summer, one of whom is in Cory’s group right now.

C.S.: My group’s background is mainly in developing electronic hardware systems for use on the Space Shuttle and International Space Station, so there were some critical gaps in our knowledge of wearable technology (the wearable part, mainly). We turned to apparel designers to fill these gaps. We were excited to see the solutions apparel students could create (they bring a very different set of experiences and perspectives to the projects), and to provide them the opportunity to work on real NASA problems that were outside of their normal exposure. The Minnesota Space Grant Consortium was the key to our collaboration with the University of Minnesota. They provided the funding for the student projects and for travel to JSC.

We were excited to see the solutions apparel students could create (they bring a very different set of experiences and perspectives to the projects), and to provide them the opportunity to work on real NASA problems that were outside of their normal exposure.

L.D.: My lab is located on the St Paul campus of University of Minnesota. The space actually used to be a textile lab starting in the 50s or 60s, but was not used for quite some time before I showed up. It’s full of all kinds of really interesting and beautiful textile test equipment from the pre-computers age, which I love.

We had to renovate a little when I moved in, but now it more than adequately houses our equipment – we have a nice variety of toys including an optical motion capture rig, a biometric data acquisition system, all kinds of electronics fabrication equipment, a digital embroidery machine (and a few regular home and industrial sewing machines), and assorted fun things like electrical muscle stimulators and exercise equipment (for experiments, of course).

The department has a full array of home and industrial apparel construction equipment – we are set up like a small factory or sample room for teaching.

The lab itself has about 4 graduate students (Master’s and PhD) and an ever-changing array of undergraduate research students (maybe 3-8 at any given time), and our apparel program has about 15-20 students per year (after the first year, which is larger). My graduate students are fairly varied in background, I advise in Computer Science, Electrical Engineering, and Human Factors as well as in Apparel Studies.

C.S.: The NASA website is your best bet for general info on all NASA research, missions, and facilities. My lab is at the Johnson Space Center in Houston, Texas, and is part of the Human Interface Branch in the Avionics Systems Division. The lab is very new and still rather small, containing some sewing and embroidery equipment, but we’re able to leverage other, more advanced facilities and expertise at JSC – human factors, electronics fabrication and testing, soft goods manufacturing, and others. We aren’t the only ones looking at clothing and wearable technology, either.

Other researchers and engineers are developing clothing for long duration space flight, exercise in space, and new space suit designs. We try to collaborate with these groups as much as possible.

What are the R&D goals of your respective institutions in relation to wearable technologies?

L.D.: I don’t know that University of Minnesota has any specific goals for wearable technology, but they are very supportive of my goals. I’m fortunate to work at a top-tier research institution, in an apparel department that has a particularly strong research focus and history.

So I think they value and foster research more than many apparel programs would, and it’s a rich intellectual environment. Being at a large university with many amazing researchers in all disciplines also helps – there’s an expert in almost anything you could imagine here.

C.S.: Again, I’ll refer you to the NASA website for NASA’s overall vision and missions. I consider wearable technology an important enabler for human spaceflight – whether it’s wearable health monitoring, displays and controls, hands free communication, or environment monitoring. We want to develop systems that improve both the safety and performance of astronauts, so that future human spaceflight is as safe and productive as possible. As we pursue these goals, we also hope that any technologies we develop for space can be useful in improving the quality of life on Earth.