Budding starlets craving the attention of the press now have a new way to ensure that all eyes are on them.  Ricardo O’Nascimento‘s new piece Paparazzi Lover is an interactive dress that lights up when it’s photographed. Feeding on the sea of camera flashlights it responds with 62 embedded led lights that cleverly direct our eyes to the direction of the wearer, making her the centre of the attention.

The dress was created in collaboration with Dutch fashion designer  Anbasja Blanken during O’Nascimento’s artist in residency at the Museum Quartier in Vienna for the upcoming tech-couture exhibition  TechnoSensual. Currently being in Vienna myself I had the opportunity to speak to Ricardo about his work.

Ricardo, I think your piece is quite commercial, as I can see definitely imagine daring celebrities wanting to wear this. But I also think you’re making a comment on celebrity culture. You seem to suggest a mutual dependency between the starlet and the press and in fact the dress emphasises that dependency by putting the starlet’s neediness on display. Should the woman wearing your dress have a sense humour about herself?
Yes, I think so. And I also agree that there’s a tension in the piece. I think there’s actually a kind of love-hate relationship between stars and the press. But why I still call it Paparazzi Lover is because I think love is more complicated than just simple happy feelings. You love and then you hate for a second and then you love again. But I also see the dress as a flirt with the paparazzi because it doesn’t show itself immediately to the camera. In fact, it only shows its full beauty after the camera flash when the picture has already been taken.

What inspired you to make this piece?
I was inspired by the anti-paparazzi clutch of Adam Harvey. His clutch fights the paparazzi, but I wanted to embrace it. It is made for an occasion where the star chooses or needs to be, so it plays with that situation.

This is the first project where you were specifically required to create a fashion piece. Did this influence how you came up with the concept?
I did fashion pieces before, but no one asked for it. And it did change the concept. At first I wanted to make an eye patch where the light would come out of the eyes, because I think there really is a dress fatigue in wearable technology. But for the exhibition they wanted to have silhouettes, so the concept was changed to a dress.

How did you experience working with a fashion designer? Did it change your process?
It was very easy. She sent me pictures of her earlier collection and I made a Frankenstein collage of it. Then she made sketches that we sent back and forth. It’s totally her design, but I made some suggestions. For example, I thought it would be better to not make the dress fully transparent so we could hide the electronics. But it didn’t really change the design that much. I really enjoy collaborations and I often work like this.

Paparazzi Lover will be on display at Technosensual, which will open June 14. If you have the chance to visit the exhibition then don’t forget to bring your camera + flash! 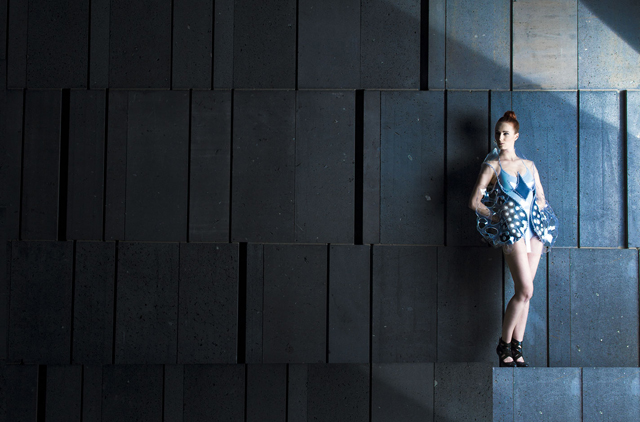