Below is an interview with Xiaowen Zhu who participated in the V2_ Summer Sessions 2011 with the work “Wearable Urban Routine”: 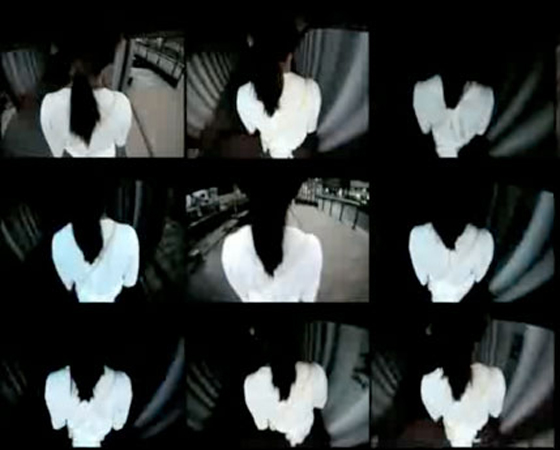 “Wearable Urban Routine” is a daily two-week long walking performance wherein the artist, wearing a portable camera embedded in an higasa—an elongated rain hat worn by the Marathon Monks during their training—films the same path everyday. The footage is then re-projected via a portable pocket projector onto the ground in front of the artist as she re-ritualizes her daily walk. In this way, Xiaowen is re-confronted both with the sameness of the ritual walk, and the small nuanced differences.

I am extremely interested in the idea of “life as a repetitive journey” within which the pattern of daily happenings reoccurs over and over again.

You describe your project as inspired by: “Marathon Monks in Mt. Hiei in Japan who perform an ascetic training called Kaihōgyō that requires extreme physical endurance in running for seven consecutive years. The Marathon Monks typically run 40-60 km for 17 hours every day following the exact same path with minimum supplies of food, water, and rest. The point of Kaihōgyō is to attain enlightenment by facing death in current life. The repetitive path of their practice reflects on an interesting parallel to people’s passive participation in the mechanical urban routine.” How is your performance different and somehow connected to this practice?

When I describe my project to other people, I would say that it has meditative quality, but it is not meditation. What I am really drawn into by the Marathon Monks’ practice is their psychological endurance in repetition and alternative perception of time rather than the physical challenge they encounter. By nature, my performance is not an ascetic training, in which sense I am not putting my life in danger as the monks do, and it is not part of my commitments to experience the thin line between life and death in this specific project.

However, I am extremely interested in the idea of “life as a repetitive journey” within which the pattern of daily happenings reoccurs over and over again. It used to make me frustrated seeing and experiencing those patterns in cosmopolitan life – Why do we have to go to work every day? Why do we have to wait for the same subway train every morning? Why do we have to turn the same corner every time? Those questions are very basic and fundamental towards the meaning of life, and I choose to represent and investigate them through a method that is inspired by a certain type of Buddhist practice.

Formally, the repetitive quality of my performance and my appearance are the direct connection to Kaihōgyō – I looked like a monk and I was extremely concentrated on the daily walking. The appearance is important because it narrows me down to a certain character or a simpler version of me who is not easily distracted and affected by the surroundings. When I was doing research about the Marathon Monks, the most fascinating part for me was when they talked about hearing sound from falling dust and smelling food from miles away. Those sensations are so basic yet often neglected. We are breathing all the time but we do not really pay attention to it. I want to reform the way I experience my surroundings by relocating my attentions. When it is simpler, it becomes clearer.

On the other hand, by positioning myself in a urban environment, there is always a tension between my action and people’s reaction. City is definitely not the ideal location to conduct such a meditative movement, and that is exactly what makes the performance so interesting. I constantly had to orient myself between a peacefully concentrated mode and an actively alert mode, for instance, when a police car drove slowly beside me, I still had to wonder for a second what if the cop wanted to question what I was doing.

And every day I encountered dozens of curious people who interacted with my performance on different levels, from staring, questioning, laughing, walking with me to physically attacking me. I was highly aware of the fact that with the garment and hat that I was wearing and the path that I was walking on every day I was calling for public attention and I had to build upon that dialogue, not necessarily by reacting onto it, but just by keeping my focus and leaving the questions to the viewers – What is she doing? Why is she doing it? The best is, while I was forming my routine with the daily performance, it also became some people’s routine as they started seeing me every day around the same time, and once I finished the performance, that routine just disappeared. 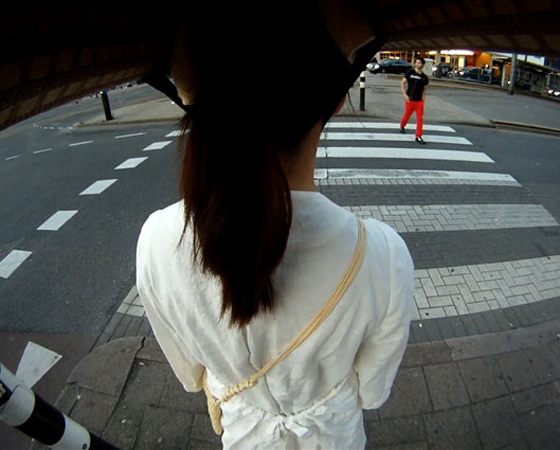 …it sounds almost redundant to say it but it is actually very difficult to be aware of most of the time, otherwise we would never feel bored.

What did you discover during your experience of performing the work? Did you see the nuances in the day to day differences? Did you attain a state of awareness as sought by the Marathon Monks?

The biggest discovery for me was a new way of experience, more so than what I actually experienced. During the performance, I did not have much expectation of what was supposed to happen, actually I kind of wished that I did not need to deal with many incidents. Of course I experienced many nuances of differences in the daily routine, from the change of street lights to a stuck gate, and they helped me to realize that everything was unique and impossible to repeat—it sounds almost redundant to say it but it is actually very difficult to be aware of most of the time, otherwise we would never feel bored.

One day, a guy was walking towards me and once he saw my projection, he immediately understood the performance and he started walking beside me and imitating my gesture and pace. It was a wonderful moment, the moonlight shed on his feet was beautiful. Then he made a comment to me, “Life is meaningless, only art is meaningful.” After that, he walked away and disappeared in the darkness. For a second I was not sure if that really happened, maybe it was a state of awareness I attained from my performance that projected his presence. But most likely he was just taking a walk and found my walking more interesting than his.

So speaking of the state of awareness, I do not feel that it is something I should be over-thinking. I enjoyed the performance and I felt being a more concentrated person during that process, and I certainly confused many people by my state of concentration. I would like to think of it as a psychological intervention, which did not have much to do with spiritual enlightenment, but it was a perceptually challenging and unique experience.

A big part of the project is also about positioning myself in a culturally foreign environment, sensing this in-between space of a perceptually ambiguous zone…

Your work reminds me of the durational performances of artists such as Tehching Hsieh and Linda Montano who, for example, spent 24 hours a day for one year tied to one another by a length of rope (July 4, 1983-July 3, 1984). As a framework, these performances sought to test the limits of the artist. On the other hand, your work is more of an awareness “device”. How would you consider expanding the work to the magnitude of these seminal performance artists?

I think for this work in particular, it is what it is. It is definitely interesting to think about another possible format of this work such as walking for 5 hours every day for one year. But as I said before, this project is not meant to challenge my physical endurance, it is more a site-specific performance piece whose length and size are decided according to the actual circumstances, such as the duration of my stay in the Netherlands, the outdoor lighting conditions, the size of the memory card and the duration of the battery, and etc.

So I am not interested in creating a longer version of this piece, rather, I am looking forward to doing it in multiple geological locations. A big part of the project is also about positioning myself in a culturally foreign environment, sensing this in-between space of a perceptually ambiguous zone so that I am not completely familiar with the environment but still trying to form a daily routine within that context. The psychological tension within that progress is absolutely fascinating for me.

I am interested in seeing the costume become a personal device for self-discovery for the user.

How does your costume play into the performance? And would a user also wear the costume? Is this part of the experience?

I had my costume custom-made in a fabric market in China. It’s awesome. I really love feeling the weight and texture of the white linen on my body while walking. Rotterdam is a very windy city, sometimes the wind would almost blow me away when I was walking on the bridge, but then the floating form of the hemline of the garment would actually calm me down and I just enjoyed seeing it as the foreground while watching the projection on the ground. I know this sounds very specific but that is what I mean by seeing and being amazed by really small details during full concentration.

The hat is made of bamboo and grass. Again the weight and texture are extremely important because I had to have it on my head for the whole time. During my research it was unclear why the Marathon Monks wore rain hats with the rectangular shape, some people believed that it would help them to keep balance while running in the woods. For me it is symbolic, just like the garment, that helps me to keep focused on my movement and also for the viewers it creates a certain kind of context to relate to.

I am thinking about inviting other people to do the performance with the costume, but therefore they will need to commit to the rules and procedures as well. Maybe they will be asked to sign a contract for that. I am interested in seeing the costume become a personal device for self-discovery for the user.