Below is an interview with the members of eTextile Workspace: Anja Hertenberger, Leonie Urff, Ricardo O Nascimento and Meg Grant who participated in the V2_ Summer Sessions 2011 with the work “TK 730”:

“TK730” is, perhaps, what the Surrealists poet Comte de Lautreamont was thinking of when he described a young man “As beautiful as the chance meeting on a dissecting-table of a sewing-machine and an umbrella!”. “TK 730” is the chance meeting of a type-writer and a knitting machine, a mash-up of pervasive home technologies of the industrialized age. As a collaborative effort developed by the members of the eTextile Workspace at V2_, the members developed this machine which can “write” in knitting.

You could say that the knitwork is the outcome of a conversation between a typewriter, a knitting machine and a scanner,

You state the your starting point for “TK 730’s” encoding was the words text and textile as these words share the same origin—both coming from the Latin texere, which means “to weave”. Can you further elaborate how this conceptual framework informed the tangible results of the machine and the choice that you made while developing it?

Although the machine itself is integral to the piece, we wanted to make the textile it produces just as important. This is why we spent so much time developing the mechanism that produces the knitwork. This turned out to be extremely challenging because none of us have an engineering background, but we all had very high standards and expectations for the outcome of both the machine and the textile it produces. This is also why we chose to knit with a beautiful merino wool yarn instead of an acrylic yarn which probably would’ve gone through the machine more easily.

Also, we wanted the knitting to be showcased as it was coming out the machine so that it could be “read” like text. This lead us to flip the needlebed of the knitting machine, so that the textile comes up out of the machine instead of using weights to pull it down with gravity as with a standard machine. Anyone who has used a knitting machine can imagine the technical challenges this entailed!

We also think that the choices we made while developing the machine, i.e., using reclaimed technologies, also informed the concept in return. You could say that the knitwork is the outcome of a conversation between a typewriter, a knitting machine and a scanner, in the same way that handwork is embedded with the history of its creation (in a knitting circle, on a train, etc) with all the flaws and features that result from that process.

Can you go further into the notion of translation of language and media in “TK 730”? There seems to be a push and pull between linearity in result, vs. complex networks in process?

That’s a good point. The resulting textile is relatively straightforward in its rendering of the letters of a word in alphabetical order. This was not only influenced by the limitations of the technology, but also says something about the decoding and recoding process. We were really into this idea of things being lost or gained in translation and communication methods (e.g., foreign languages) having an aesthetic removed from their literal meaning as with concrete poetry, which uses words for their form as well as meaning.

We wanted the result to be something that could be appreciated and understood by everyone, not just by the machine. Lastly, we really wanted people to see that their input was really being interpreted and that it wasn’t just a “magic box.” This is also why we decided to use audio, so that users of the machine hear the letters spoken back to them as they type and also why we didn’t obscure all the mechanics with the case. We wanted it to be as transparent as possible. 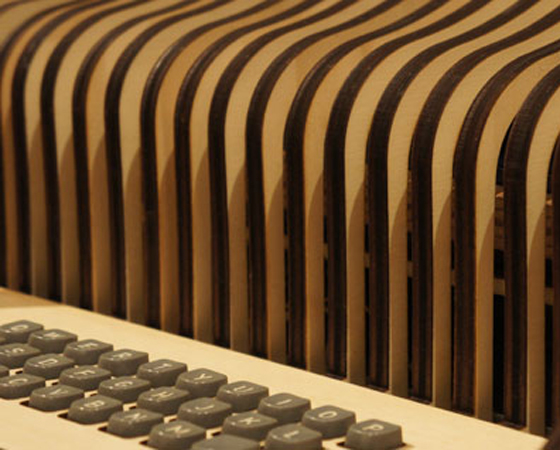 What is the relationship to vintage media? Are you making an ecological statement by re-using existing disused objects? The technological philosopher Gilbert Simondon when describing the technical object was very interested in the evolution of technologies, which are not necessarily linear or deterministic. Do you see the typewriting and knitting machine in this fashion, as being part of a continuum of technological developments? Can we cast away the notion once and for all that old technologies are not “useful” or meaningful?

Vintage design really appeals to our group, but we never really set out to recycle anything as an integral part of our statement. It was more out of necessity so that we wouldn’t have to start building completely from scratch. It is quite gratifying to think that we gave some new meaning to near-obsolete technologies like electric typewriters and photo-scanners and it certainly changed the way we think about the potential uses of discarded technologies.

Simondon was also interested in the encyclopedic—in ways of schematically transferring knowledge. Are you interested in this for your work? In the concept of “opening up” the machine to new uses etc. important? Do you plan, for example in making the “TK 730” open source?

The code we wrote for “TK 730” is open source, however, we don’t see the act of sharing the code as part of the work itself. We haven’t published the code yet, because we haven’t made the relevant documentation to make it easy to use and build upon, but if anyone wants to use it, we encourage them to get in touch!

The operator can type something that is very special or secret because she knows it will be hidden in the encoding process.

Where do you see the user/public in all this? Would you like to “market” the machine and sell it? Make an “instructables” so other can re-tool their old machines? Or do you consider it an art object?

The process of building “TK 730” was too labour-intensive and time-consuming for it to be sold for any reasonable commercial price. For the same reason, we’re also quite attached to it! We originally planned to make a series of these machines, but it would also be exciting to see others pick up the thread and come up with their own variations.

The role of the user/public is very important when it comes to interacting with the machine. “TK 730” cannot knit a re-assembled word of its own accord—it needs an operator. The operator can type something that is very special or secret because she knows it will be hidden in the encoding process. So something we were planning was to offer bespoke pieces of the knitted textile for sale. People could choose to knit love poems or curse words, for example, and either hang them on their walls or stitch them into their jacket linings.

This relates back to the visual beauty of a language even without being able to read the literal meaning. You can look at the knitwork from “TK 730” and see it as a pattern without knowing it originated with a word, or you could try to decipher it and come up with a totally new meaning. We also like the mystery this creates around the knitted work. People naturally want to decode it.

So in a strange but nice way, although the machine was intended to produce our artwork for us, it has absolutely become an art object in itself.