Below is an interview with Olav Huizer and Jelle Valk who participated in the V2_ Summer Sessions 2011 with the work “Moving Mapping”: 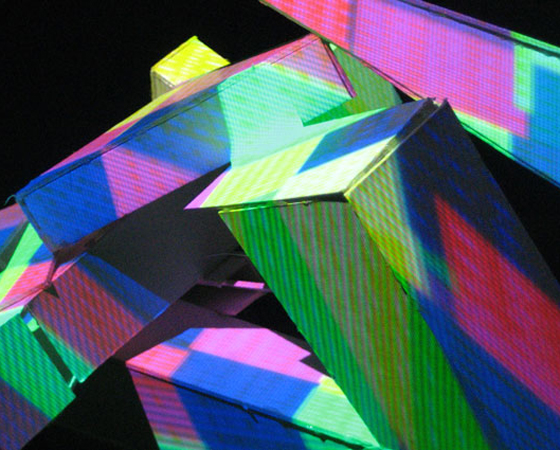 “Moving Mapping” is a device which does just that: 3D mapping on a moving objects! The current iteration of the project features a “mother” sculpture which the audience can interact with by rotating it on a moving platform. The rotation is directly linked to the playing rate and playing direction of the projected video mappings permitting the designers to transform the perception of the 3D shape through movement.

As soon as the physical sculpture rotates, the digital scene does the same, keeping the mapping in sync.

How does “Moving Mapping” work?

This is what we have been doing for some time now, experimenting and exploring these possibilities.

What we did with “Moving Mapping” is map the physical reality of a 3D scene, instead of a 2D mapping, from the projector’s point of view. This means that we have an exact digital copy of the physical scene. So now we know what the back of the sculpture looks like, even though we are only projecting on the front.

Next to that, the rotation is linked to the timeline of the video projection. This is what makes it possible for the viewer to play the video timeline backwards and forwards while rotating the sculpture. 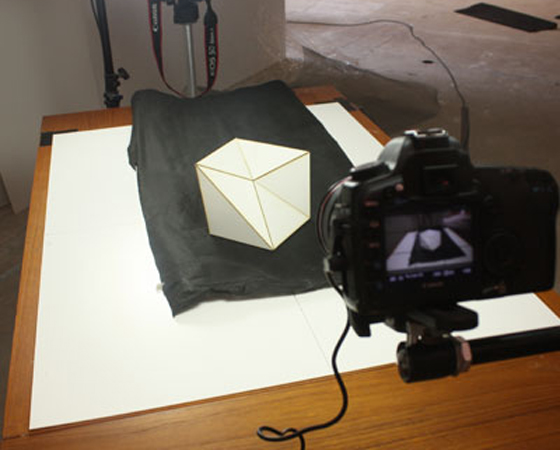 Being so involved in the technique, we wondered about the additive value of this ‘trick’.

How did you get the idea for “Moving Mapping” and collaborate?

We are part of a collective called WERC (crew spelled backwards). We are 4 people. 2 of us worked on this project at V2_ but I think the other ones are just as much responsible for the idea as we have been doing sculpture mappings for some time now.

Mostly the sculptures were placed in a party setting following the music and giving an extra dimension to the party. Coming from this we were always focused on having site-specific sculptures and overlaying them with music visualizing content. Being so involved in the technique, we wondered about the additive value of this ‘trick’. And also through having a constant question or dialog with the physical versus the virtual world.

This was our attempt of uniting or finding the tension between the two.

This could be data visualization were the physical object is able to ‘talk to us’ using surface as an interface.

The effect of 3D mapping video in real-time is very destabilizing, somehow it shifts the reality of objects. What kinds of scenarios or applications do you imagine for this device?

We see this device more as the first stage of combining the physical and the virtual. A real visible result, where even though there’s are a lot of similarity’s between the digital and the physical, you see a lot of real differences.

Not being tied to a square screen or any surface, object or material, we can use any data output. This could be data visualization were the physical object is able to ‘talk to us’ using surface as an interface.

In a while I think we will all want to go back go the physical world, so maybe the virtual will meet us there.

Beamer_Control2 from WERC on Vimeo.

Distortion, glitches, optical illusions—these are all fields of interests to us.

In a V2_ video you say that: “Important for you is that what you have digitally is the same as in the real world.” Are you looking for a 1:1 mapping of the real world, or are you more interested in the notion of distortion?

Both are subjects of our research.

1:1 mapping for us was important because it made us able to stand and walk around physical and virtual objects while having grip on both of them at the same time. Knowing that they are both the same did not have much to do with the appearance of the work, for us was an important step.

Once we had them (the physical and the virtual) on the same playing field, the notion of distortion became more interesting. We could change the physical sculpture’s appearance by projecting on it. However, when you project ice melting mapped on top of a “mother” sculpture of the ice, the “mother” sculpture does not melt along with it. Distortion, glitches, optical illusions—these are all fields of interests to us. This is where you see the difference between a real painted wall, and a projected one.

You describe your work as a tool. How do you see artistic expression in relation to tools?

Tools should be there to help you express your artistic perspectives. But there are also tools that have an artistic value, programs or objects that say more that what they are. Tools have their own meaning, the medium becomes the message,or technoesis. The mediation of the media creates individual meaning. I think in the beginning a lot of techniques or mediaa start out as art, but as time goes by, they become tools for new artistic expressions.

With all these new technical developments the question rises whether a tool is art. And everybody who uses these tools is a artist.

Art forms are predicated and based on the use of tools, and artists have been involved in the making of tools for artistic aims, but it seems the equation is inverted and that the tool is the art?

Yeah, I think it can be. One thing that we’re sure of, is that you can use the tool to make art with. With all these new technical developments the question rises whether a tool is art. And everybody who uses these tools is a artist.

A nice example I think is JR, a photographer from Paris. The tool he uses, a camera is now available for almost everybody. His own expression makes it an art. He pastes prints of his photographs huge on to walls. Which has a world wide impact. I would like to end this interview with a quote of JR:

“Everyone can tell a story through art, and the Time is Now to break down barriers to expression and give people the tools to be seen and heard.”