Below is an interview with Kasia Molga who participated in the V2_ Summer Sessions 2011 with the work “Oil Compass“: 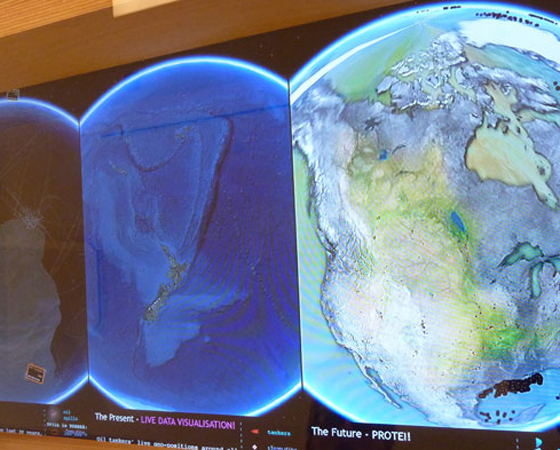 “Oil Compass,” done in collaboration with Sey Min, is a screen-based data-visualization interface, which lets users become aware of real-time oil spills on a global scale. Through the interface we are able to search and get close up views of locations, as well as view the history and data pertinent to the events. Through these we are able to consider the impact of continuous and largely under-reported cases of oil pollution in our global waters as well as ponder solutions for the prevention and de-contamination.

Everyday each tanker and each rig releases 600 litters of oil into the sea, not mentioning that we also have a “regular” vessels which use oil as a fuel.

One of the questions that you ask as is if we can “really connect with the complex subject of oil spills and understand its environmental impact?” via a real-time data visualization. What are your conclusions after this time? How can the visualization tangibly make a difference?

Like everything in the nature—an action causes reaction or/and provoke a chain of events causing imbalance. Everyday each tanker and each rig releases 600 litters of oil into the sea, not mentioning that we also have a “regular” vessels which use oil as a fuel. Although the vastness of the water covering our planet might seems almost infinite, within those areas where spills happen the local biodiversity is affected thus affecting us. “Oil Compass” through containing past and present data, as well as live data, gives a picture of the scale of that problem, because oil spills don’t happen ONLY when it is broadcasted on the news, but they happens everyday.

The crucial and most interesting features of this work, in my opinion, is a live data visualization of oil tankers—updated every 10 minutes. It is also interesting to see (although not surprising) that most of them are around Europe and North America—places where the level of energy consumption is the highest. One of the maps which I produced while working on “Oil Compass” was a visualization of Earth at Night. North America and Europe are full of light compared to the rest of the world, and obviously there are a lot of tankers and that is where the biggest spills have happened.

Places like Africa or Asia—which are heavily explored for their oil, seem very dark in comparison. Africa didn’t register any huge spills except in South Africa.It was not easy to get data on the position of oil rigs and we are still working on this. But I have noticed that often rigs and platforms are planted in places which don’t seem to be so well lit-up…such as Angola for example. I don’t want to jump to false conclusions—as “Oil Compass” is ever-evolving project which demands to be constantly updated, but while working on it I couldn’t help thinking how big chunks of oil are taken from places with very limited access to energy/electricity and then transported to places which use it like there is no tomorrow.

I hope that I can make people to gain a distance—to see it in its entirety—so that perhaps a bigger emotional bond can be created.

I hope that “Oil Compass” can act as an objective and easy to understand a picture of the situation. By using a tool such as Google Earth—everybody can access it and contribute to it. At the same time by using the image of the globe—our planet—giving a viewer a point of view of an “astronaut” and some control of how to navigate/spin/move that virtual sphere—I hope that with that I can make people to gain a distance—to see it in its entirety—so that perhaps a bigger emotional bond can be created. It has been an interesting experience as this object which I call “Oil Compass” had to fulfill two, quite contradictory roles—it had to be very informative and objective about all facts on the subject but at the same time it had to evoke some emotions on viewers.

“Protei” is aimed to be a low-cost device that semiautonomously sails upwind, intercepting oil going downwind.

“Oil Compass” is also a modeling too to explore the potential of another work called “Protei” an Open Source Sailing Drone also developed at V2_. Can you tell us more about the “Protei” project, and is this research recursive, can it be applied to other environmental mappings?

“Protei” is a shape-shifting sailing robot that collects pollution—and it is a brainchild of artist/designer Cesar Harada. “Protei” would operate as a fleet and is developed as open hardware. The current version is “Protei_Oil_Spill” for collecting spilled oil at sea. It is aimed to be a low-cost device that semiautonomously sails upwind, intercepting oil going downwind. “Protei” is using existing technologies in an innovative design which can be implemented in the short term to address a crisis. Being an open source project, other versions may be designed in the future for other purposes: “Protei” for the North Pacific plastic garbage patch, heavy metals in coastal areas, fishery monitoring, physical oceanography, climate change studies…

“Oil Compass” in this context has 3 functions:

1) Educational/Didactic: for everyone concerning past major oil spills as well as everyday spills (which depends on the volume of tanker vessels around the world and oil rigs). The plan is be keep updating the data with other less “famous” spills as well as information how the spills were managed and dealt with. This will also help in assessments when and where another disaster might happen.

2) Navigational: tracking the traffic of vessels and therefore spills; keeping updated maps with position of all oil rigs—so that it can become as a centralized informative hub; keeping updated maps not only with oil spills situations, but other issues/problems which waters are facing today, i.e.: plastic debris, radioactive spills etc. Ideally I also would like to be able to update all of it with currents and weather forecasts—but that is all a long shot. A better funding structure would be very needed to achieve that.

3) “Protei” Locations: based on the navigational function of “Oil Compass” we can asses where “Protei” drones are the most needed, how to navigate them around other vessels, rigs etc; obviously tracking “Protei” and informing what function drones have in what areas. 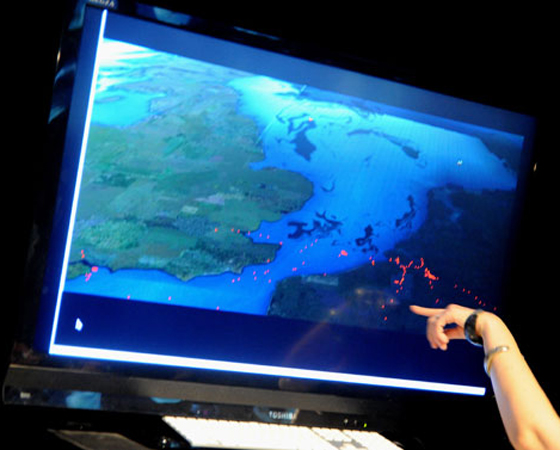 Of course we are all political—whether consciousness or unconscious of it. We are all involved in some relations with other people and/or environment and nature.

When looking at eco-art I am struck by how for a number of years now we have engaged in “causes” in the arts from feminism, cultural identity, to AIDS, etc. Why do you think that artists are invested in the political? Is it endemic of society being in need of more “political” players? Or is it more of a crisis in terms of art’s role in society?

But aren’t we all “political?” The concept of evolution is political. Of course we are all political—whether consciousness or unconscious of it. We are all involved in some relations with other people and/or environment and nature. We are all engaged in some kind of dialogue with our surroundings. I am not sure if the engagement in politics/social or environmental issues are the result of a crisis. Alain de Botton once said that (and I am paraphrasing not quoting) we, humans, when we are around something/some situation for a bit too long, we stop to notice it. The role of artists and what artists can do is to remind us about those forgotten/taken for granted/unnoticed things.

I am rather a facilitator who creates a platform for people to explore certain issues in alternative ways and learn about them and form opinion for themselves.

So I guess it is not about the crisis of art’s role. It is just that artists often can see sharper and clearer and deeper and spot alternative/forgotten/hidden situations, matters, connections and thus also respond to the zeitgeist. It is often a commentary on existing situations. On a personal level, as an artist/designer who engages often (but not always) in environmental issues, sometimes I feel that I don’t create just an artwork—a subjective transformation of my opinion/view of the world. I am rather a facilitator who creates a platform for people to explore certain issues in alternative ways and learn about them and form opinion for themselves. In “Oil Compass”—I think I had a difficult task of trying to be objective about the subject—not to get carried away with too much emotions…

We often forget to perceive ourselves as a part of nature and we often make that disassociation even when we speak of “we” and “nature.”

How do you relate your work to earthworks of the late 60s early 70s such as Robert Smithson’s “Spiral Jetty” which celebrated nature while also aestheticizing it? Are we now aestheticizing nature through politics instead of structural compositions?

I would turn that question around a bit to speak here about the concept of beauty—whether it lies in pure visual harmonies of colors and shape or is in fact encapsulated in the content/the emanating/the message. Both are important—the capturing of fragments of ephemeral sublime moments to convey that feeling of awe—the fact that we are part of this amazing creation as nature—we are its fruits, therefore what we do shall be integral to it. However, for some reason sometimes is not.

We often forget to perceive ourselves as a part of nature and we often make that disassociation even when we speak of “we” and “nature.” While nature/environment/climate is a part of a human narrative, I think many of the earth/land artists of the late 60s and early 70s explored nature in that way. Hopefully having that in common with people such as Robert Smithson, I don’t work with the landscape as such, but with its digital representation. I also often use a “bigger picture” in my work—whether it is a map of the entire city or a whole globe; or an interactive live data feed. The immediacy of time, possibility to witness concurrent events at once—that concept of liveness and presence is more important in my work…