Below is an interview with Julie Legault who participated in the V2_ Summer Sessions 2011 with the work “Heart Beats“: 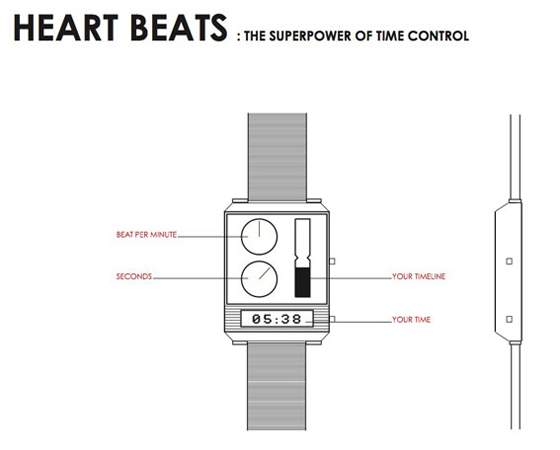 Since art was divided from the medical sciences in anatomical studies, scientific knowledge of the inner body has been devoid of an emotional and ethical layer…

If we map the history of wearables—one of the earliest instantiations is the wrist watch. Before being worn on the wrist, the watch was considered a “female” accessory and was worn around the neck in elaborate jeweled encasing. Watches worn on the wrist were later popularized by Germans soldiers in WWI for coordinated military operations. However, the proliferation of time pieces on the body and in urban areas also elicited a number of unease and controversy as Stephen Kern in his book “The Culture of Time and Space” describes. The onset of having access to the knowledge of precise time caused a controversy over “health risk” of perceptions of passing of time, which was perceived as stressful to the general populace. Is “Heart Beats” meant to be stressful, or comforting?

“Heart Beats” is not meant to be either. A new take on the watch and its tendency for multiple functions, it looks at how our lives are controlled by man-made constructs, and is informed by the heartbeat hypothesis and the questions surrounding the physiology of emotions and perceptions. Since art was divided from the medical sciences in anatomical studies, scientific knowledge of the inner body has been devoid of an emotional and ethical layer, and, while the preoccupation with the body and identity have never been stronger, direct knowledge of what is inside our own bodies is still missing. “We feel our heart beating, we hear our blood singing .. but we have no direct access to exact knowledge of what is inside our bodies” (Robert Zwijnenberg, The Scientific Imaginary in Visual Culture, p.31)

Actually developed under the working title of “The SuperPower of Time Control” the watch is a tool of self-awareness and a thing of wonder. 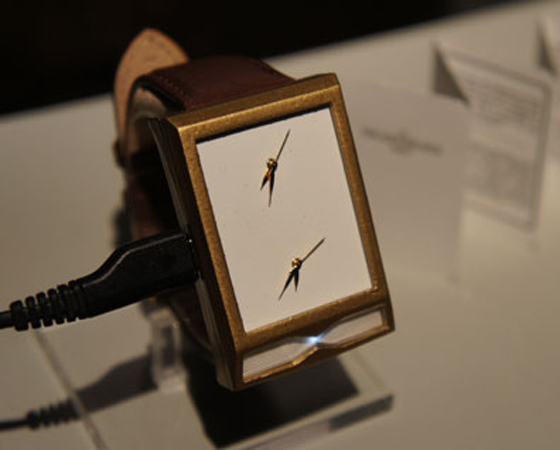 How does “Heart Beats” work?

“Heart Beats” monitors the wearer’s heartbeat with a sensor located in the watch strap, under the wrist, and modifies the speed of the clock dial according to an algorithm based on the wearers ‘regular’ heartbeat, which is calculated in the first few days of wearing the watch.

As the watch lives in the realm of the subtle and the tactile, clear mappings and digital representations would be impractical and unwelcomed.

As the watch lives in the realm of the subtle and the tactile, clear mappings and digital representations would be impractical and unwelcomed. A possibility that has been explored and needs further thought is the feeding of the data of individual watches into ‘family clocks’ or ‘group clocks’ where the time of each individual in the group is represented by a dial. The implication of transmitting such private information to a larger public sphere, and the effects of comparison of individual beats needs to be further explored.

The aesthetics and the concept cannot be separated, as both are vital to the piece and have evolved together, informing each other, all throughout the process.

“Heart Beats” is also a beautiful piece of jewelry, can you describe the aesthetics and how it was made?

Actually, the watch is not ‘also a beautiful piece of jewelry’ it is, first and foremost, a desirable object, (and as such can be described as beautiful jewelry). The aesthetics and the concept cannot be separated, as both are vital to the piece and have evolved together, informing each other, all throughout the process. Inspired by traditional watches, the materials and weight were important factors in the process, as were technical requirements for the electronic components and manufacturability.

Technically, the casing was made through a 3d print in wax, cast into brass, which was polished and gold-plated.  Before arriving at the final casing, sketches and cardboard models were made, and a plastic print was produced from the first version 3d CAD model. The bracelet was hand crafted in leather around the sensor, thanks to youtube tutorial videos.