From  sonar gloves to thimbles, from haptic vests to scarfs, designers have been exploring various fashions as navigational aids for the visually impaired. The latest project is “Le Chal,” a pair of haptic sneakers by “inter-gineer” (interactions + engineer designer)   Anirudh Sharma. 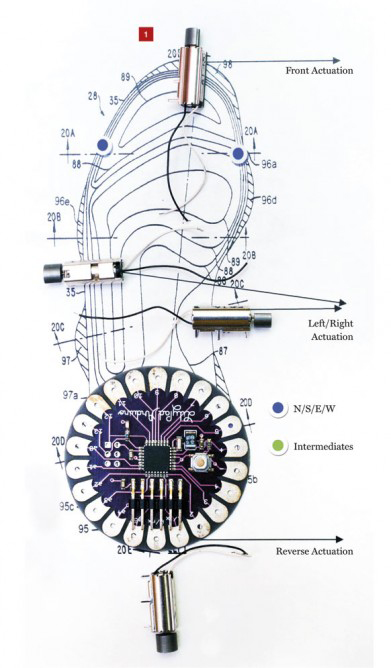 Sharma’s “smart” wearable system Le Chal, which is Hindi for “Take Me There,” consists of a pair of shoes and an Android app connected with Bluetooth via a Lilypad Arduino. The app provides the wearer navigational information using Google maps and the smartphone’s GPS.  The four vibrators located in the front, rear, right and left side of shoe navigate the user informing them with a buzz which direction they need to turn.  In addition, the shoe contains a proximity sensor that warns the user of any obstacles up to 10 feet.

It would be great to see some usability studies done on these various assistive technology garments. I have a strong feeling in the next few years we’ll see haptic way finding wearables developed and brought into the market. Questions remains: Which wearable — shoe, vest, scarf, etc—  is the most suitable?