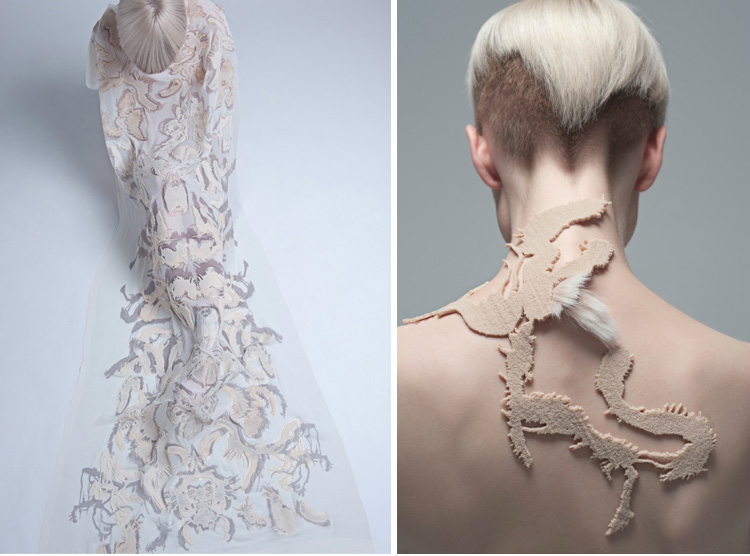 Andreea Mandrescu’s “Inlaid Skin” decorates the body with insets (or offsets) of synthetic lace-like soft tissue. These decorative skin grafts — like scarfs — are accessories that can be draped and wrapped around the body.

Mandrescu considers her ethereal collection as “versatile surfaces” or fabrics suited to beautify both the human body and architectural interiors. I caught up with Andreea Mandrescu to learn more about the inspiration for her project “Inlaid Fantasies.” 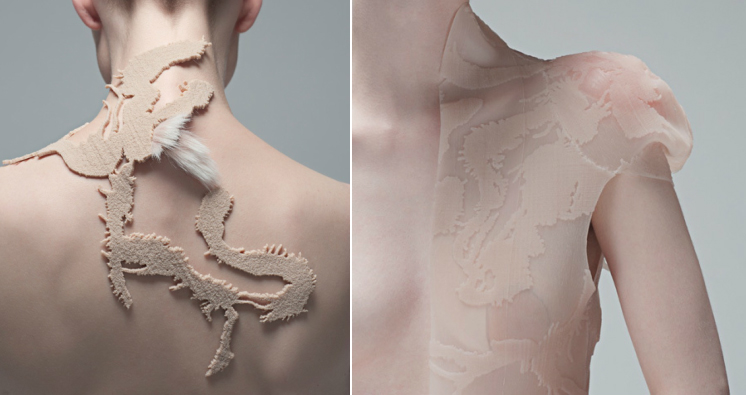 FT: Can you briefly explain your work “Inlaid Flesh’” and how you see your work and research impacting your own practice and the field in general?

The project “Inlaid Fantasies” is based on the research of marquetry and inlay crafts, the materials and the aesthetics traditionally used. The aim of the project was to push the boundaries of these crafts by using different materials, processes and aesthetics and thus, to create a new tactile and visual experience that will give a new perspective and functionality to the traditional crafts.

The design outcome was a collection of versatile surfaces that can be used in numerous applications. They can be used as accessories or as components in fashion pieces, made to fit garment patterns. The same surfaces could be used for interior decoration and surfaces, from removable window glazes to new forms of upholstery.

I believe that by reinventing the crafts, I created an interesting versatile surface that can have an impact in more than one field. 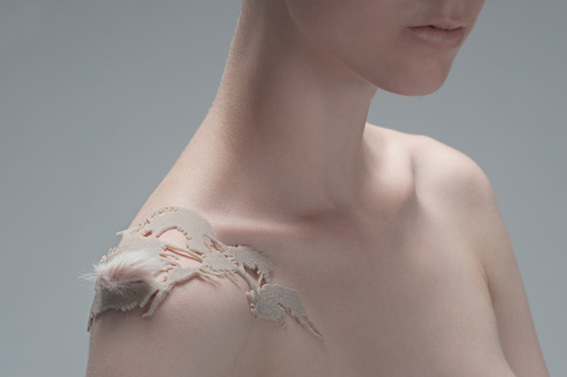 FT: From stretching, piercing, inking and implants, historically we human beings have been fascinated with body modification. Your experimentations in Inlaid Flesh reminds me of beautiful scars and process of scarification. Did the concept of body modification drive your explorations?

“Inlaid Fantasies” came about mainly from reinventing marquetry and inlay crafts, but my idea, before hence, was to create an “inlaid skin”, “inlaid body”. This idea had an impact in the kind of materials that I used, different kinds of rubber, that some, like silicone can easily mimic the real skin.

Another impact in my project was a previous project of mine entitled “Tattoografts”, a conceptual three dimensional skin graft tattoo that can be overlaid onto the skin. 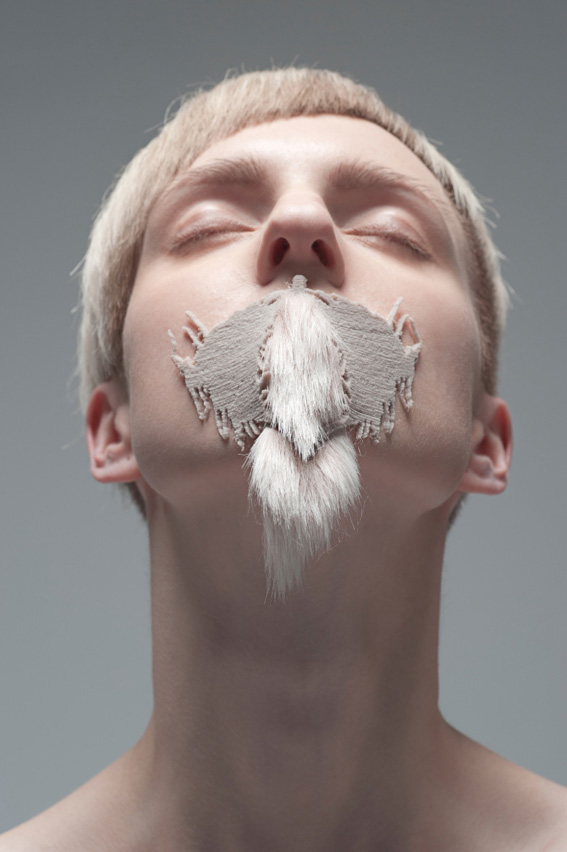 FT: Do you consider your work “jewelry?”

Part of my design outcome can be accessories, rubber scarf or rubber ornaments on skin that can be temporarily attached with body glue. I suppose part of them can be indeed jewelry. 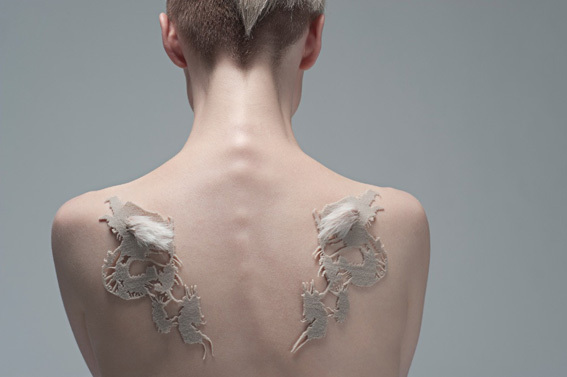 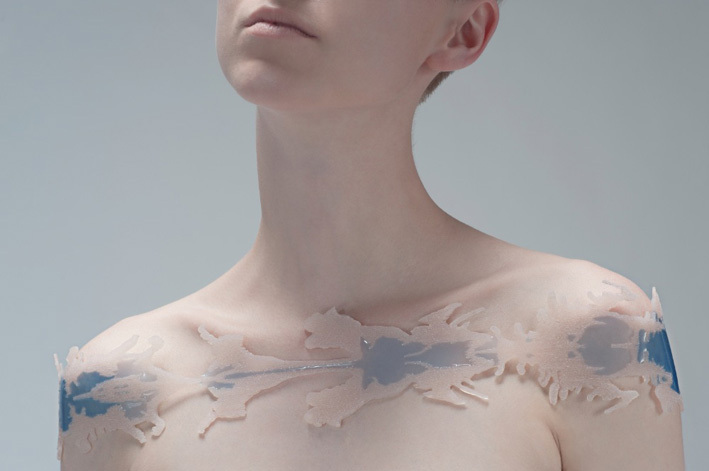 FT: Like clothing, Inlaid Flesh subtly reshapes the body and silhouette. What is it about the human body that inspires you?

I’m inspired by the skin and how the skin changes shape on the bones, the curves it makes and the texture. I see it as a surface of exploration, that I tried to mimic it and create the illusion in some of my pieces that they are a continuous part of it. 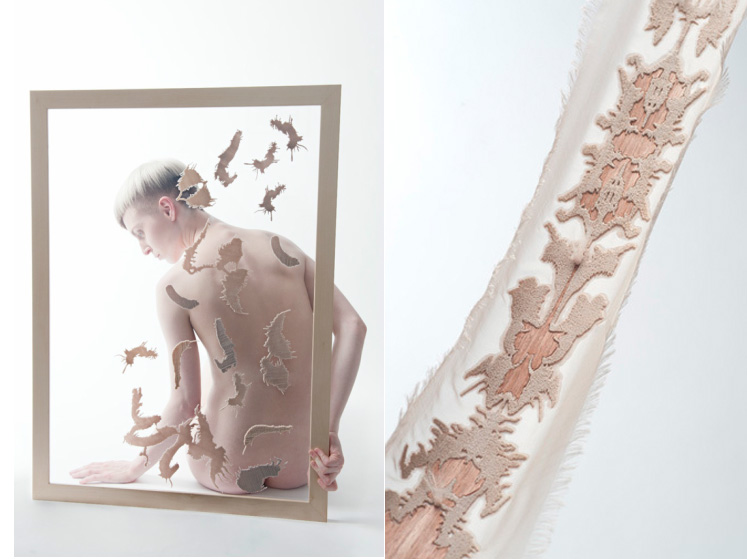 FT: Why do you feel it’s important to reinvent the crafts?

I used the research i had done on marquetry and inlay crafts to guide me, by process, materials and imagery and i reinvented the crafts by adding or combining this knowledge with my own personal imagination. This is how “Inlaid Fanatsies” came to life.

I think that by researching different crafts we gain more and different knowledge than starting afresh. i believe that the world of crafts is an amazing source for inspiration that can be a useful guide in inventing something new. Also by reinventing crafts we, as designers can bring a new perspective on some crafts that are seen more as hobbies mostly done by ealdery people. 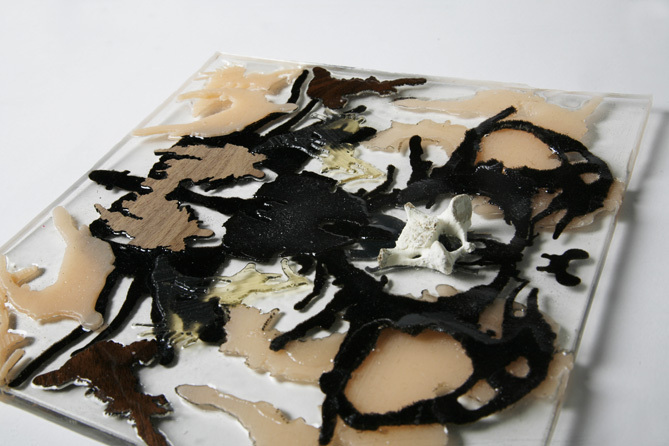 FT: What are you currently working on and what ideas would you like to explore in the future?