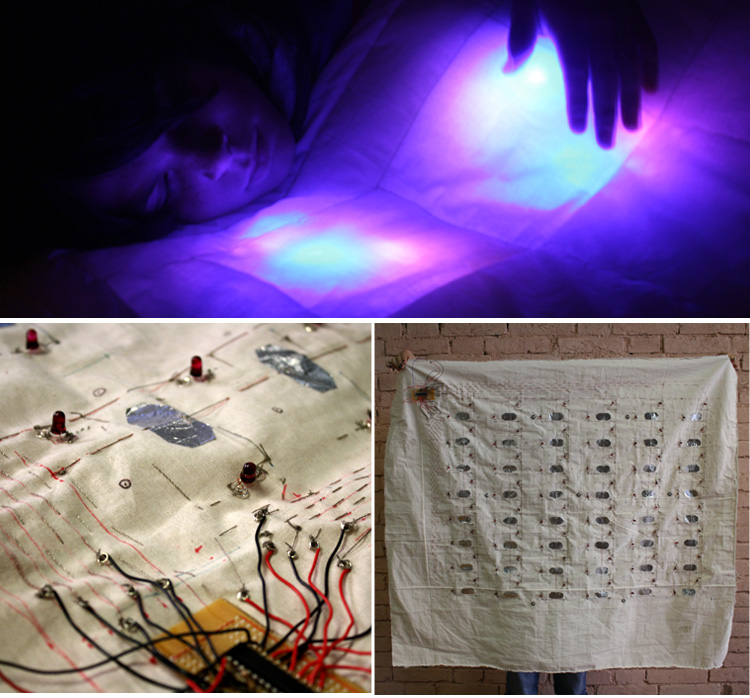 Developed by Alberto Elizondo, Roberto Picerno, Francesca Pizzutilo, Lullaby is an illuminated quilt that bridges the distance between a parent and a child geographically apart through interactive play. Touching a quadrant on one quilt, simultaneously illuminates the same pattern on a second quilt.

Techno-intimacy is the theme that drives Lullaby, using the intimate ritual of bedtime as the context. The quilt itself becomes a visual metaphor of a lullaby, using similar principles such as repetition and simplicity for the gaming dynamics.

The interaction is quite simple: each quilt is assigned a specific LED color and touching a section of a quilt causes the quilt to illuminate. The quilts are networked so a pattern created by one person is shared with the other.

The project is beautifully documented here and the process of developing the project is just as lovely as the final prototype itself.

Bacterial Motility: a second skin that grows and moves

The Techno-evolution of the E-book

Ridogulous Labs brings you wearable technology for your pet!