We live in a world today in which we are experiencing a dramatically increasing convergence between technology and the body. From the gathering of our own biometric data to the unprecedented ease to connect with family and friends, technology inarguably has permeated into the most intimate part of our lives. And it’s only the beginning.

According to interaction designer Marco Righetto, in the near future, our future bodily relation with technology will begin long before we are born.

Aura is a set of wearable devices for expecting couples. A dress for her and a bracelet for him, Aura allows for the ambient communication between mother, father and unborn child. 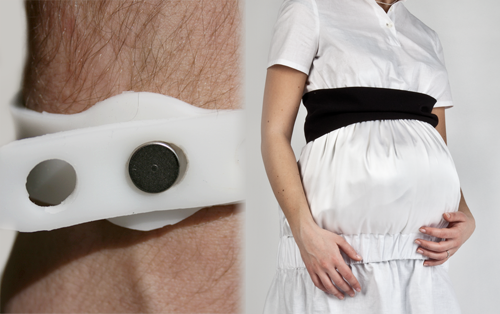 Fetal movement in utero is translated into light patterns on the mother’s dress and vibrations on the father’s bracelet. In addition, the couple can “ambiently” communicate with each other if apart.

Personally, what I find magical about this project has less to do with the ambient communication between expecting mother and father and more with the social communication of the unborn child.

When the garment illuminates, the internal kicks and turns that the mother is experiencing is visually translated for others to experience simultaneously. In and of itself, that I find rather poetic and beautiful.