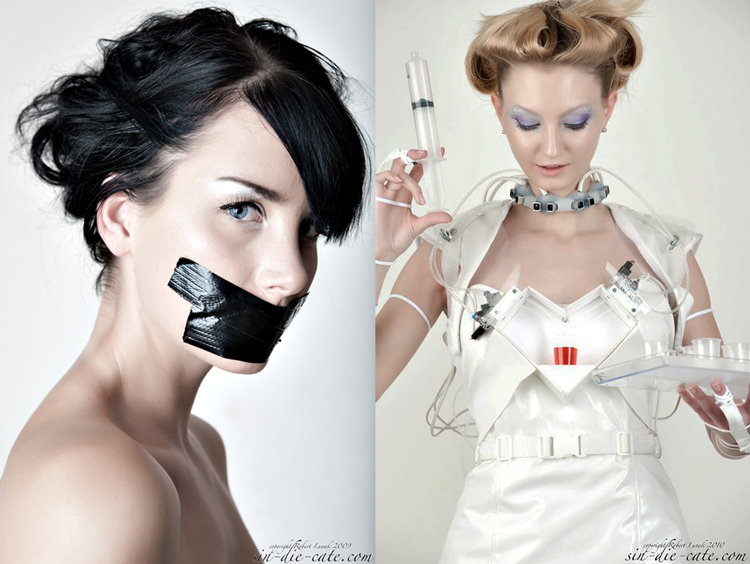 Fashion designer Anouk Wipprecht is moving up in the world of fashionable technology. With a new piece of technogical couture coming out almost every other month we decided it was time for an interview.

How did you start designing fashion that uses electronics?
I’ve always wanted to design towards things around the body that have their own ‘behaviour’ I started with fashion design when I was 14 and after a while I thought I found myself in theatre & dance, but still noticed cravings that were going beyond the person itself controlling the interactions that happened with the design so I started being involved in interaction design and electrical engineering (moved to Sweden for this) during 2007 to create systems that suggest that behaviour. So instead of the body having to give a purpose to a design, the design gives a purpose to the body.

What are the challenges for you as a fashion designer working with technology?
Hm, I like to design towards the fragility that electronics have to offer, but with that fragility also bugs and short circuiting appear a lot. There is a lot of discussion around the ‘fail’ of electronics (specially when hand crafted) but in a way that also has its poetic touch: by creating something uncontrollable it sometimes really becomes out of your control. Another thing is money: these projects cost a lot to develop.

There seems to be some hesitation for fashion designers to work with technology. Why do you think that is and what makes you different?
Personally I think a lot of designers are kind of afraid of the complexity that technology can bring. You should see it like a playground, a place of experiment, and as you dive deeper and deeper into the technology and systems it rewards you with endless possibilities. Fashion designers tend to think complex when it comes to their designs but afraid when it comes to knowledge outside of their comfort zone. This new way of creating requires a more sophisticated approach to design that understands social interactions, speaks the language of engineers, and examines potential experiences within a human-interface context. Platforms like Mediamatic and V2_Labs out here in the Netherlands helped me by getting a grip on collaboration, building small circuits and learning about microcontrollers. I think that’s a good start. 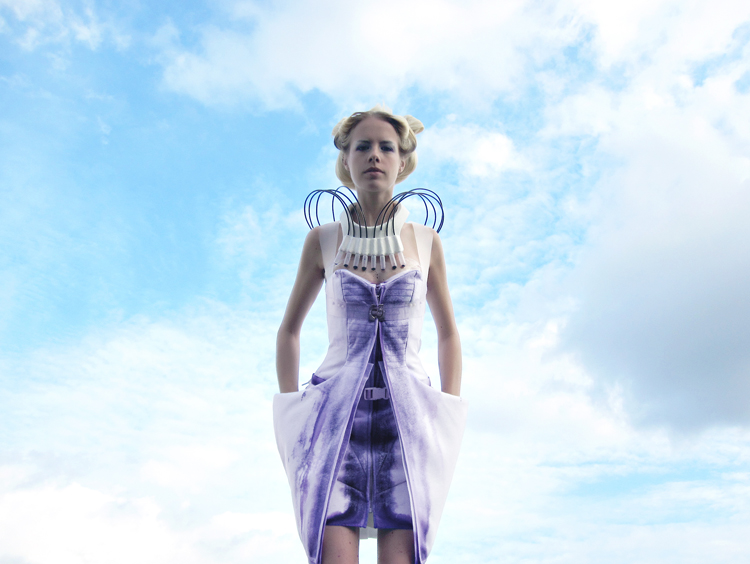 What is your favourite work you’ve made and why?
All my past art-projects are my babies but I like to see them grow, they are not mature yet. I think all works should be levelled up, just like humanity does. I’d like to see a project like Fragilis (two designs that react to each other when approaching) or Pseudomorphs (selfpainting dresses) or Intimacy (e-foil that ‘breaths’) in 10 years from now… I think it’s a never ending story.

Do you have a (fictional) woman or man in mind when you design your pieces?
Mostly dollfaces, fragile, comatose. For me the ultimate display because moving bodies distract too much. I rather just let her body ‘be’ and the design do the ‘living’ for her; visualise her breathing, movements of skin, a heartbeat… Projecting the inner life outside the body. The illusion of vulnerability. I think I like the subject of ‘hypersensitivity’ a lot and I always have a certain type in mind formy prototypes but I can never totally figure out how and why. That makes it my utopia.

What role does “performance” play in the types of garments you craft?
At the moment any performance still leads away from the attention that the design can bring. But I’m working on it. To experience the joy that movement has to offer. My last project was a ‘cocktailmaking dress’ called DareDroid that I made with Jane Tingley and Marius Kintel for acocktailmaking robot festival called RoboExotica. The dress provides you with a juice while she’s sensing you (IR-sensor collar) and as soon as you complete a game of truth or dare the dress automatically provides you with booze to go with that juice spilled through pneumatic control valves. We won an award for ‘communication/ best interaction’ that evening. 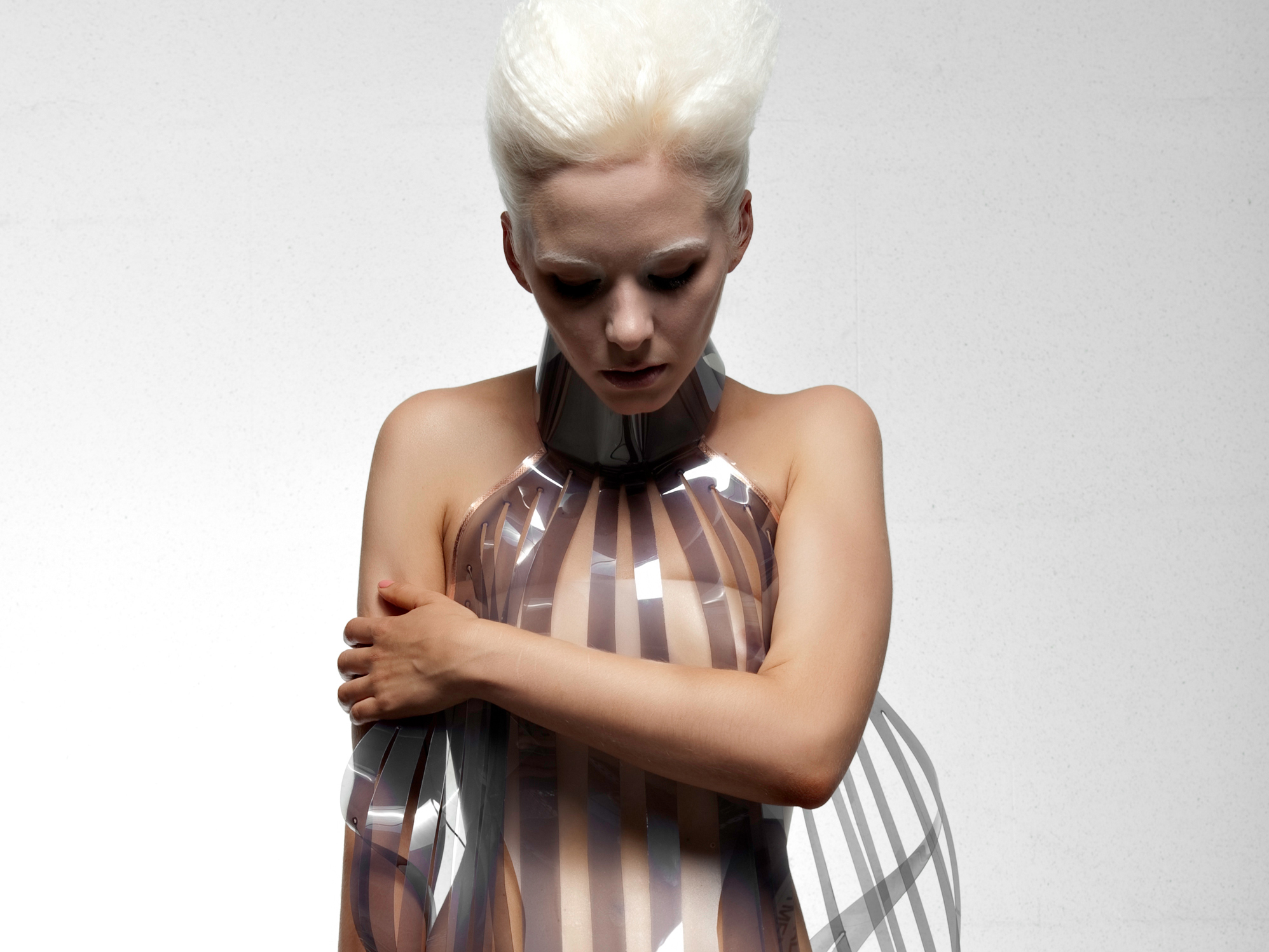 What do you think is interesting about technology and what can it bring to fashion?
We shaped technology and technology shaped us, it defines who we are as persons. And so does fashion. By placing technology on the body it becomes an extension of the self, so they say. I think both fashion as technology has a similar purpose when this happens: it can function as a statement, in ways of expression, as reason to communicate or as protection amongst many more – they give an added value to each other.

Many people approach the combination of clothing and technology as being futuristic. Do you see yourself as a designer that makes clothes for the near future or uses futuristic clothes as a medium to discuss contemporary ideas?
I tend to create my designs towards soft sci-fi statements, in my mind technology should become more fragile and second-skin like than bulky and robotic. I like to think in ways of embryonic, organic and symbiosis. That’s why I like to experiment with fluids and foils coupled to responsive sensory systems rather than reacting led’s and displays. As Science Fiction author J.G Ballard once said; “Fashion is the recognition that nature has endowed us with one skin too few, and that a fully sentient [ability to feel or perceive] being should wear its nervous system externally”. And we need to redesign that skin.

Technology should become more fragile and second-skin like than bulky and robotic. I like to think in ways of embryonic, organic and symbiosis. 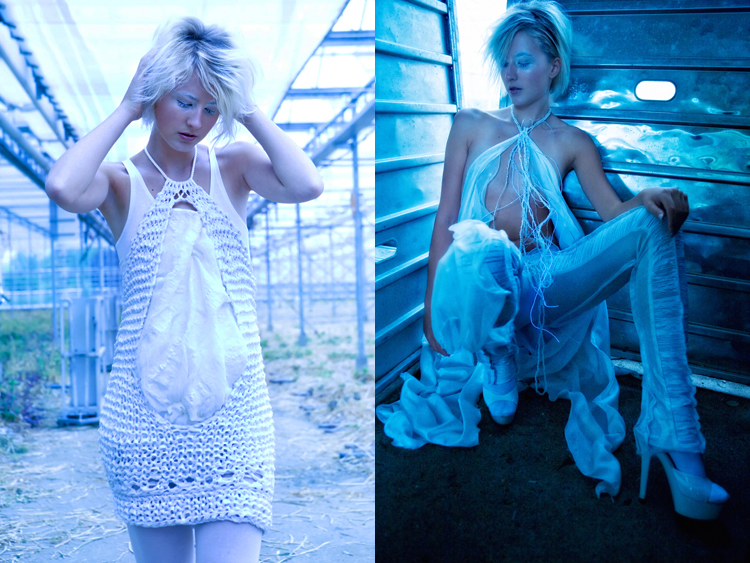 How does the fashion world look at your work with technology?
Some people start to say that my work goes ‘beyond fashion’. At first they didn’t understand, now they still don’t understand but they start to get what I’m doing. That’s fun. I never fully understood the world of fashion either. I always say that I don’t necessary like fashion but that I like to play with the system; standing on the border, not being absorbed in but also not an outsider. I see the fashion world having a lot of social empathy, but lacking of emotional empathy. I never got that since fashion is partly art and art is partly driven by feelings, thus emotions.

Where is HauteTech at currently and where do you expect it will go?
I think there is a lot of really good concepts going on that don’t leave the desk. I believe in more complex systems, emotional driven devices, mockups, tests and experiments and above all – collaboration between different platforms. As soon as different disciplines force their powers those things will get out of the concept phase and happen in real life.

Does wearable tech have a place in ready-to-wear fashion?
Our society will get more sensory based, and as soon as we adapted that into our system, intelligent clothing will be booming.