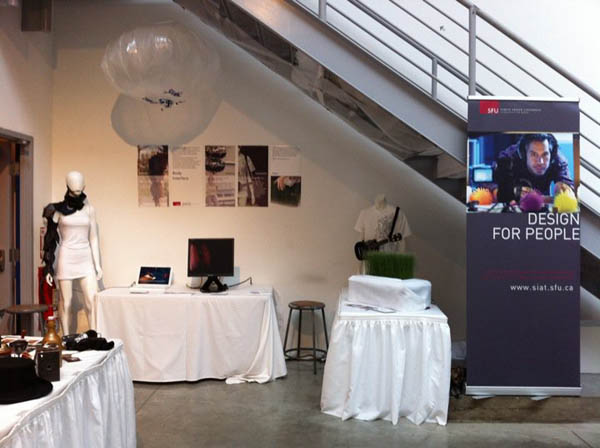 Students’ projects from a course, titled “Body Interface” in School of Interactive Arts and Technology at Simon Fraser University were presented at the student showcase of IDMAa conference last week. “Body Interface” course focuses on embodied interactions and is taught by Jinsil Seo and Greg Corness over last two years. Students develop wearable technologies, ambient environments and physical interactions in the context of intimate, personal and ubiquitous computing. In the showcase, two wearable projects and two environmental installations as well as an overall video presentation of the course were exhibited. Parasite by Alanna Kho, Amy Ngai, Georgina Chaplin, Luyi Wang 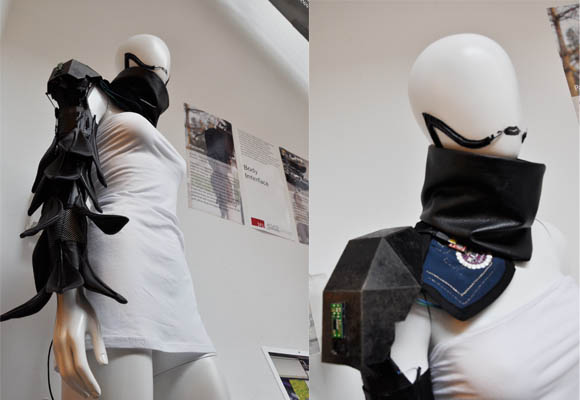 Parasite is a wearable electronic garment that explores the idea of symbiotic relationships with technology. It can be seen an independent parasitic organism that reacts to environmental heat by retracting its scales for ventilation: however, this reaction cannot occur unless its circuit runs through a human body. This project draws on symbiosis as a natural inspiration for armor or defensive wear. It is a commentary on techno-determinism that examines the machine as an extension of the self rather than an opposing force. Parasite is worn around the arm and neck and consists of electronics and an Arduino sewn into fabric. For this showcase, we drew lips with conductive paint on the face of a mannequin and audience could make a complete circuit touching the lips with two wires on the face. Here is a documentation video of an early version of Parasite. Ukule(LED) by Eduardus Pradipto, Danielle Chan 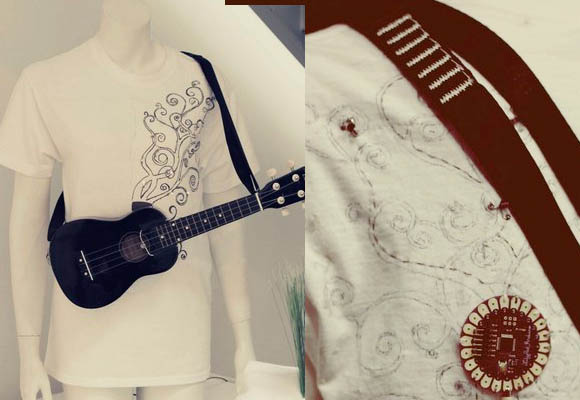 Ukule(LED) is based on the desire to visualizing invisible phenomena so that it becomes both visible and mesmerizing. By illustrating how “sound travels”, this project utilizes 24 LED lights which are sewed on a T-shirt, with a microphone attached to a ukulele. Ukule(LED) integrates interactions between the user with the Ukule(LED) into a visual representation and expand audience’s experience of the music. Grass by Lisa Guo, Maxine Kim, Jinsil Seo 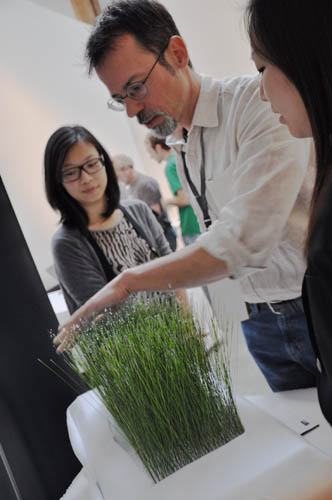 Grass is an interactive tactile interface that invites participants to touch the luminous fiber-optic grass. Different light patterns are created depending on how participants touch Grass. This explores natural “touching” or “stroking” gestures experimenting soft-circuit techniques with alternative conductive materials: conductive paints and fabrics. I will post how we made a stroke-able grass later. For more photos, please visit my flickr page.

Call for Participation: Art.on.Wires – A Laboratory for Live and Interactive Art & Technology