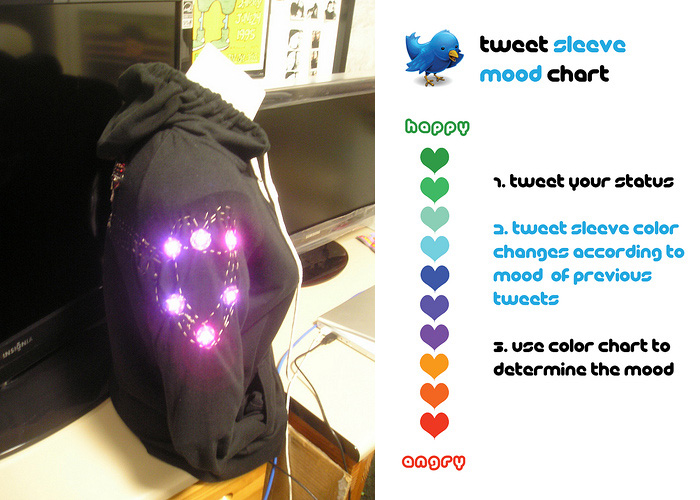 From hoodies that update your facebook status to shoes that tweet, designers are fusing wearable technology with the two social networking darlings, Facebook and Twitter. The latest project I discovered is the Tweet Sleeve by Vanessa Sorenson. The tweet sleeve is a wearable that visually displays the moods of your twitter stream on your garment. If you’ve been sending out angry tweets, the LEDs on your sleeve will radiate red. If your spirits suddenly brighten, the colors will shift to a “happy” green. The project was intended as an exploration on “how social networking, more specifically Twitter, can demonstrate personalities in the real world via the virtual world.” I suppose there are algorithms that can successfully decipher your “mood” or “emotions” through scanning text. Google did once suggest a link to me “are you in a BAD relationship” when it scanned an angry email from a “friend” in gmail. It cracked me up… google was right. I wonder what the mood status would be for the twitter feeds of all your “friends”? You would quickly know if you’re following a pessimistic or optimistic crowd. So next time you tweet, check your tone. Your sweatshirt may just remind you that you need to smile once in a while.

The body as a musical object