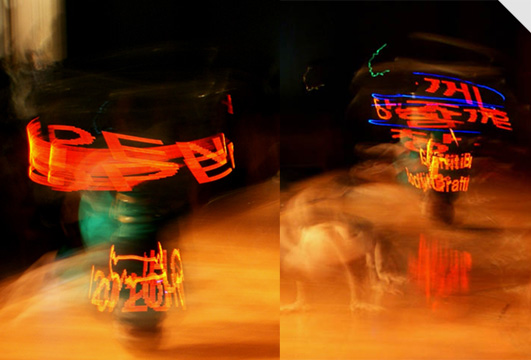 Body Graffiti is a performance art wearable technology that uses the illusion of persistence of vision (POV) to create ephemeral graffiti via body movement. As dancers (in this particular performance— break dancers) perform head spins, windmills and flares, messages programmed into the custom designed LED POV system are displayed.

I caught up with Younghui Kim, a New York City-based artist, who developed the project at WCU Digital Media Public Art Research Center at Hongik U. Body Graffiti was a collaboration with Dan Mikesell, and the world champion B-boy crew, Last For One, 2010.

Enjoy the interview below! 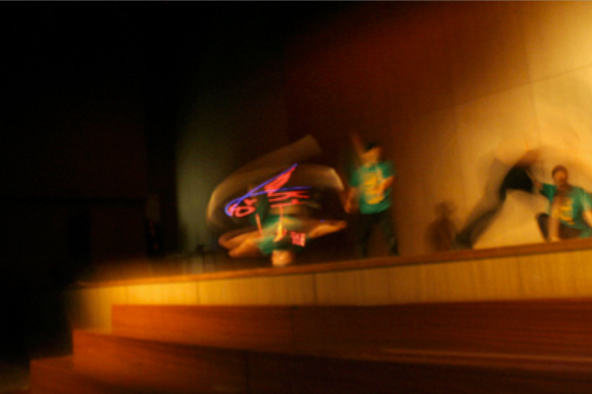 My first wearable project was a costume (a future media jacket) for a performance, ‘AfroFuturistic’ at The Kitchen, New York, 2003. I could say that I’ve always been interested in performance wearables from the moment I started to create fashion items integrated with technology.

I find that wearable itself can be an expressive media platform. At the same time, worn by a performer during performance, it elevates expressibility of body language as creating a stronger media platform combining two forms of media that have been so close to art and technology – wearable and performance. I’m sure modern & experimental dancers are attracted to wearable technology for the same reason that I am attracted to as one of wearable technology artists.

What inspired you to create Body Graffiti?

It was three years ago when I coincidently met a producer of a B-boy musical within a month I landed in Seoul to teach interactive media. Performers like B-boys are originated from street art just like graffiti, therefore I considered them as public art performers and I imagined them dancing in the public park at dusk without having any stage or screen behind them. They express in their fierce body language and I started with an idea of enhancing their expressibility using dancing motion. Three years later, ‘Body Graffiti’ became reality when I got the WCU research grant for the digital media public art research and found a great b-boy crew, ‘Last for One’ who were willing to collaborate with this wearable research.

What are the next phases for the project?

Body Graffiti is still in progress as it is being upgraded with more defined custom circuit board design with higher LED pixels to express more detailed graffiti graphics and fragmented sewable PCBs to be conducted with flexible electronic materials for better wearability. 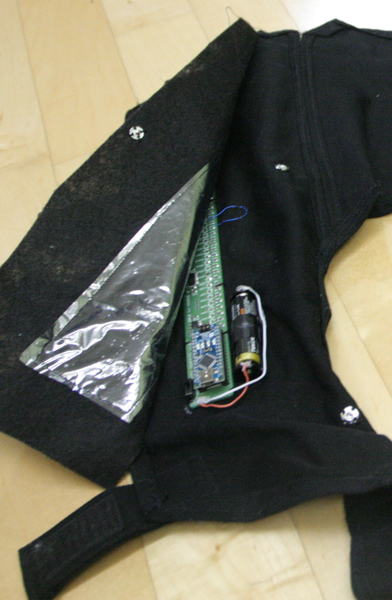 Actually, I’ve already begun to explore better solutions based on the first prototype. I’m redesigning the Body Graffiti PCB to be modular in multiple parts and to be easily integrated in the clothing. Also, the design of the Body Graffiti wearables would be improved to be more fashionable in Hip-Hop style. I also like to create different design and version of Body Graffiti for difference kind of experimental dance performances. 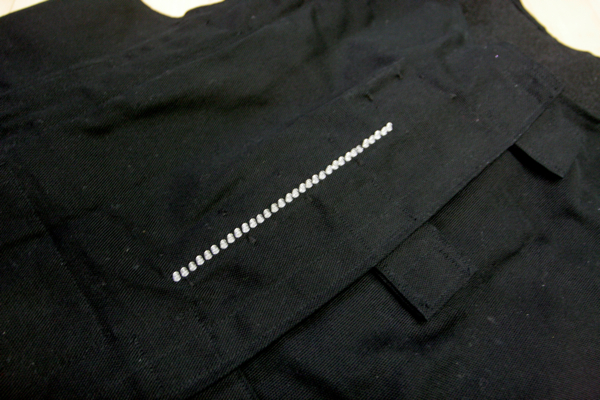 What are the current hurdles you need to overcome?

Technically, I need to find a better solution to integrate smaller, flatter, lighter battery that has higher electrical power to handle custom printed circuit board to control 64 outputs. I am near figuring out some sensible power solution for the next version of Body Graffiti. I’m waiting for the paper thin battery products that I can get my hands on. Also, generally hand sewing conductive thread takes longer hours compared to soldering electronic parts with wires. Last winter, I had to use Arduino nano or mini instead of the flat Arduino Lily Pad because I didn’t have enough time to finish multiple wearable pieces before the HCI performance with b-boys. I would like to re-complete one set of electronic components using Arduino Lily Pad in a new version of Body Graffiti, seeking softer technical solution for the wearables as that seems to be my on-going hurdle with wearable technology projects.

Thank you for the interview. I’m looking forward to seeing future iterations.

Have you heard of Claytronics?

Worklab: Interactive textiles and how textiles visualise the environment and power my mobile.