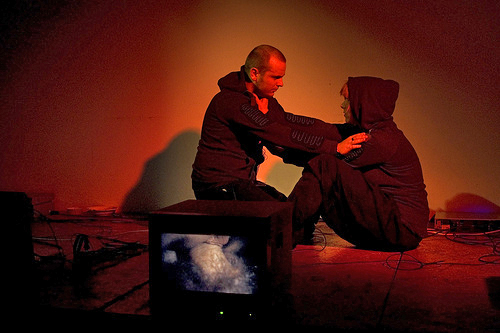 ‘When two objects or people touch, they exchange electric charge.’ “barbwired”, developed by artist Ewelina Aleksandrowicz, is a conceptual sound performance piece that literally and metaphorically uses the “energy” exchange between two individuals to create a dynamic aural experience. “Sensual feelings, toxic obsessions, intense emotions” Ewelina says, “are translated through physical contact into sound vibrations.” The project consists of two wearable tech garments stitched with FSRs( force sensitive resistors ) and patches of conductive thread. The garments are used as wearable instruments to trigger pre-recorded sounds of bodies in movement. To play the sounds, the couple needs to be in physical contact touching the conductive thread patches on their partner’s garment. The conductive thread touch points function as the input and ground for the Arduino. Sounds are manipulated and transformed by squeezing the partner’s arms, depressing the sensors. The FSRs control the effects of the sounds (in Max/MSP). Depending on the intensity of the partner’s squeeze and how many sensors are depressed simultaneously, the sound is transformed and changes intensity. Each sensor and combination of sensors creates a different effect from reverbs to distortion.