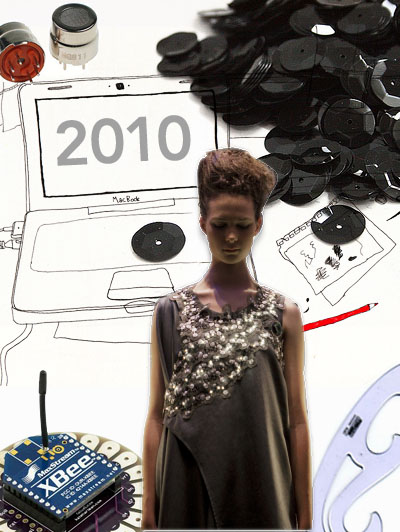 Happy New Year everyone! I am very excited about this year and have a lot of projects in the works that I will reveal in the upcoming weeks. This year is certainly going to be busy and productive. A sneak peek at what’s coming: — A new and thorough Learning section chockfull of e-textile, sewing, computing and soft circuit tutorials — A new updated Resources section — An Opportunities section for art grants and opportunity to show work at conferences, etc. and a quite bit more as the year goes on. If you aren’t following me on Twitter, please do because I shoot off a lot of relevant tweets that I may just be too busy to blog about. Also I’m looking forward to any feedback from you as to what would make the Fashioning Technology experience more delightful, specifically what types of resources would be helpful to you. Please LMK! Now looking at wearable technology in 2010… The wonderful folks at Ecouterre asked me for my predictions on where wearable technology will be in 2010. Instead of predictions per say, I provided them a vision of my hope and aspirations for wearable tech this year. 2010, I believe, is going to be a spectacular year for developments and curious experiments in wearable technology. 2009 was the year of sensors. Designers and tinkers alike embedded environmental sensors in garments that detect toxins in the air; biometric sensors that monitor the wearer’s pulse and levels of excitement; and touch-and-pressure sensors that allow user’s to receive virtual massages and hugs. 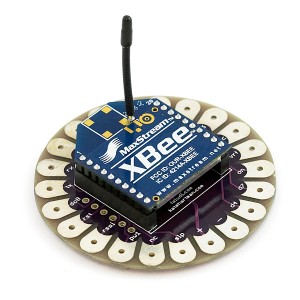 Will 2010 be the year of networked wearables?

2010 will be the year of networked wearables. The XBee will take the stage and partner with the Lilypad Arduino in wearable projects. Our garments will not only gather data (be it environmental, biometric, etc.), but they will be able communicate this data to other wearables, the environment, nearby objects, and mobile software. As wearable technology becomes more and more technically sophisticated, we will also see small, yet considerable, improvements on the aesthetic front. This will require partnerships between fashion designers, interactive designers, and software and hardware engineers.

Lastly, the current trend in the music industry to adopt illuminated and high-tech costumes for the stage will continue to grow and we will see more DIY versions of these high-tech outfits adopted by less mainstream bands. SO what do you all think? What types of projects do you hope to see or make this year?