The LED Kimono is one of the more sophisticated performance-oriented wearable technologies to date. The project is designed and fabricated by composer and performance artist Miya Masaoka. Embroidered with 444 individually controlled LED’s, the kimono sleeve functions as a low-resolution textile video screen and expressive interface. In its current version, it responds predominately to sound and movement of the wearer. Realtime video image pixelization can also be interpreted to the LEDS on the LED KIMONO.

Looking at the process photos, the project used typical LEDs and a combination of e-textile sewing techniques and traditional wiring. 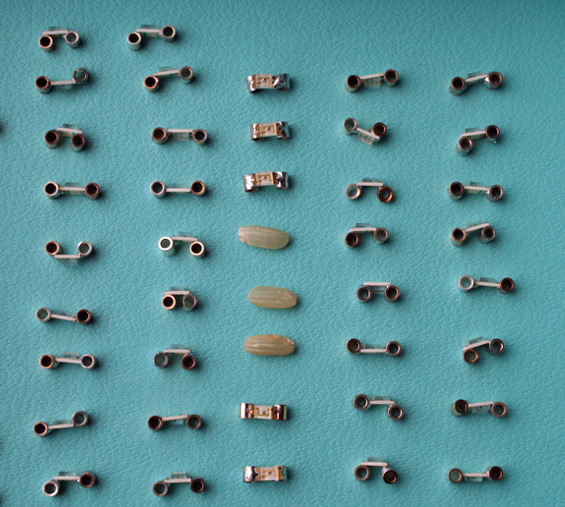 I did find this fantastic photo (above) comparing the size of SMD LED sequins to a grain of rice. Future iterations of the project entail embedding the kimono with smarter behaviors. The kimono will have the ability to listen, make informed decisions, improvise and respond to its environment. From the artist: In this way, a musician can perform with this kimono, and the kimono will respond by displaying changing and evolving patterns, designs and images. Thus, the kimono is a kind of “instrument” that, while not generating music itself, will respond to music, sound and motion of people walking in the vicinity. The LED KIMONO will also be presented at Siggraph in Yokohama, Japan 2009. via TalktoMyShirt

“Auto Filter” Scarf Covers Your Face When It Senses Pollution