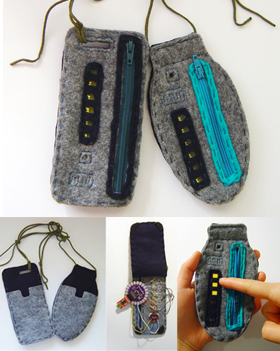 Using technology to connect people over a distance is a common theme addressed with wearable technology. Jai Yi Lin has adopted this theme in her project “Measure: How much I miss you!” which consists of two networked wearable accessories. What is refreshing in Lin’s interpretation as seen in her user scenario video below, is that her accessories act as a conduit to connect an aging mother with her son rather than two distant lovers. This change in demographic, for me, makes the project significantly more meaningful and accessible. A familiar interface — a zipper — is employed to send a message. Once a message is received, the LEDs on the recipient’s accessory light up. In addition, the accessories have the ability to play music or play a voice message to comfort the user. The video below has nice overview of the wearable concept.