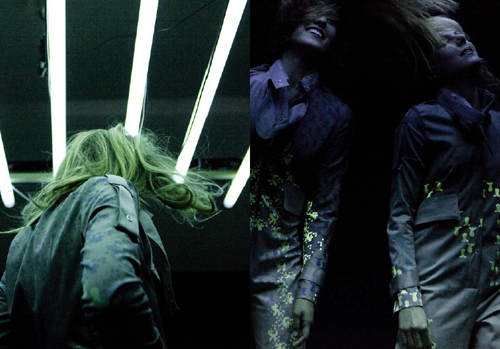 The tiny LED light is quickly becoming the signature of any and every wearable technology project. For many designers, there is something irresistible about creating a luminous silhouette. Robert Zeise, in his piece Over_All, creates two suits patterned with phosphorescent (glow-in-the-dark) and photochromic inks. The suits themselves do not emit light: Instead they are catalysts that trigger lights to turn on in the the room based on the wearer’s position. Integrated with IR-LED sensors, the garments inform the “system” about the wearer‘s actual position in the room. Different types of lights are activated according to the wearer‘s position, revealing the light-sensitive hidden patterns. Zeise’s wearables create an interesting interplay between fashion, bodies and its environment. Rather than environmentally-aware garments that sense and measure their surroundings, he inverts the pattern and instead imbues the environment with the capability of sensing and responding to the clothing.

Skintimacy: The Sound of Touch