I just stumbled across the iPod headbands from I/THREE/SIXTY that remind me of the DIY version, the RockStar Headphones, from Fashioning Technology. 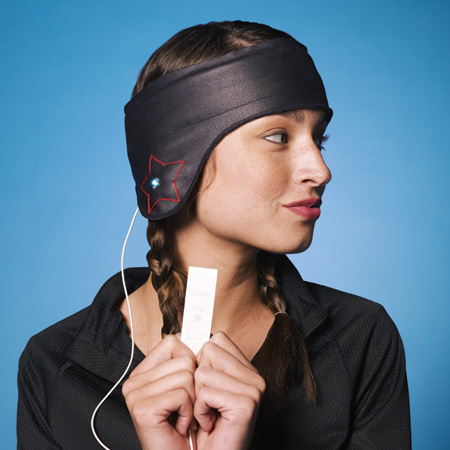 I originally designed the RockStar headphones purely out of necessity. Personally I do not like earbud headphones — they do not fit my ears comfortably. That being said, it’s quite difficult to jog with a larger set of headphones. I also wanted a warm headband that would cover my ears because, even in LA, my ears get painfully cold when I jog in the evenings. I don’t really quite understand how I can be dripping in sweat while my ears are ice cold (ears don’t get much circulation I guess) but that’s way beyond my expertise. To resolve the problem, I created a headwarmer with a pair of headphones embedded in it which eventually became a project for the book. Well that’s the back story…

In the I360 version, the iPod is placed directly in the headband itself resolving the problem of having to hold the MP3 player. I’m curious if this very comfortable and practical as I personally like having the access to the controls. I360 will soon be releasing a beanie and cap version as well.

Symposium on Fashion & Technology at STRP