I can’t tell you how much I love the video/project above. I must admit I have a passion for break dancing — perhaps spent too much time on Venice Blvd as a kid. And, of course, I love all things that glow. So breaking combined with interactive wearables just makes me giddy. 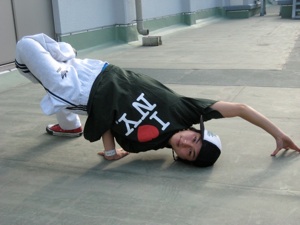 The wearables above are part of the Minoru Fujimoto’s research at Kobe University. Combining his interest in breaking and technology, Fujimoto created the Wearable LED Dance (above) and Wearable Dancing Instrument (below) as research for his doctoral program. From the videos, it appears that motion controls and beats in the Wearable Dancing Instrument. Upon receiving further information from Mr. Fujimoto, I have learned that the Wearable Dance Project uses a PIC and the patterns of light are pre-programmed beforehand and not in real time as I previously reported. The Wearable Dancing Instrument, on the other hand, does use an accelerometer mounted on the shoe to generate music. The system also controls the scenario for the performance by changing the sets of sounds generated by motion commands. According to Fujimoto: “Dancers gain new dancing and musical expressiveness by using our system in dance battles. If one dancer is playing a drum-track by dancing, another is playing the bass line, and another is playing conga beats, i.e., they are playing music like a band and almost like an orchestra.” Both projects are a pleasure to watch! Enjoy!

The Voice Knitter: Clothing Knit from the Sound of Your Voice