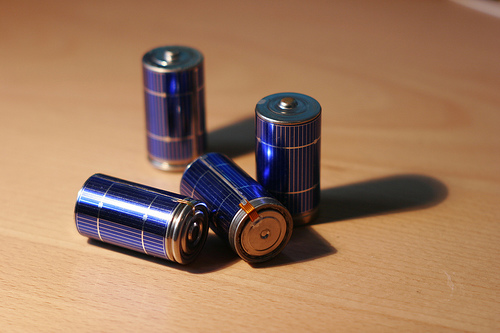 Although I wouldn’t quite yet run off wrapping all my batteries with flexible solar cells, Knut Karlsen’s SunCat Batteries are an interesting concept. 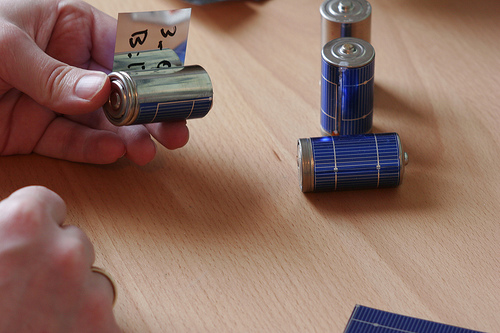 Knut created a handful of rechargeable batteries that re-energize themselves via the sun. His thoughts were that you could just leave your batteries lying around on a table all day and have them re-fuel using the sun’s energy. Although he created a moderately working DIY prototype, be warned that leaving batteries lying in the sun is dangerous: they can explode. Also his current system charges the batteries painfully slowly which isn’t good for battery life. Regardless of the current limitations, I like the idea of designing systems and interactions that are very simple and user-friendly. Knut’s system (if possible to be truly realized) would eliminate the need for extra tools and equipment. The interaction is simple: Pull your batteries out of your electronics; set them aside on a table; and, a few hours later, replace them back into said gadget. This process would also eliminate the need to skin and compromise the aesthetic of all our technologies (or accessories that we carry our technologies) with blue solar panels. If you are brave enough to create to create your own, Knut has documented his DIY Solar Solar Rechargeable Battery Process. 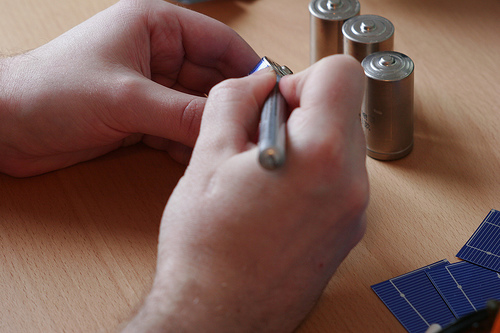 BTW, instead of using a conductive silver pen for the connections (which can easily rub off via friction) you can consider using a thin piece of conductive fabric tape with conductive adhesive. The tape is fairly great at adhering to most surfaces. Via NotCot