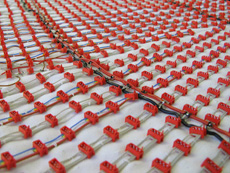 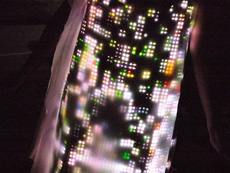 Over 15,000 LEDs were embeded in the fabric of the video dresses for Hussein Chalayan’s ‘Airborne’ line. My favorite part of the interview is when he cited Make Magazine Blog as his biggest source of inspiration. “The sort of people who are curious, who play with technology, and do something for the sake of it. Sometimes it’s also not really designed but it might be an ingenious idea. And people just fiddle around and put something together and post it on the internet. Those are the real innovators who often don’t have big names,” Waldemeyer says. For more about Moritz Waldemeyer check out his Blog.