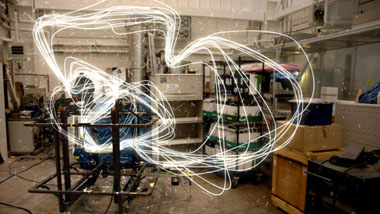 The secret lives of invisible magnetic fields are revealed as chaotic ever-changing geometries . All action takes place around NASA’s Space Sciences Laboratories, UC Berkeley, to recordings of space scientists describing their discoveries . Actual VLF audio recordings control the evolution of the fields as they delve into our inaudible surroundings, revealing recurrent ‘whistlers’ produced by fleeting electrons . Are we observing a series of scientific experiments, the universe in flux, or a documentary of a fictional world? By Semiconductor Films
Magnetic Movie from Semiconductor on Vimeo.